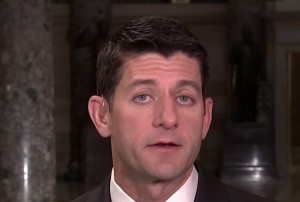 What a difference a day makes. It wasn’t too long ago that John Kasich and Ted Cruz were teaming up like Marvel’s Loser Avengers to try and kneecap Donald Trump for the Republican establishment, but after Tuesday night’s bloodbath, there’s a new tune coming from the top of the party. Take, for example, Speaker of the House Paul Ryan, who has gone from blasting Trump over his plan to ban Muslims from entering the United States, to holding his nose while promising to support Trump, to now telling the Morning Joe crew that despite some differing views, Trump and the GOP “Come from the same principles”:

I’m familiar with his tax reform plan, which is lower rates across the board for everybody and all businesses for faster economic growth. We will have a good debate about how to do that, but if from what I recall from his plan, it’s basically that. On health care, he knows we need to repeal and replace Obamacare. So look, I don’t see a big problem here…I don’t see a big issue with that. We have lots of different views but come from the same principles.

That’s about as quick a trip as you’ll ever see through the five stages, which could mean that Ryan has been preparing for this pivot for quite some time, OR maybe Ryan knows something that we don’t about how things are going to go down at the Republican National Convention. Despite his insistence to the contrary, Ryan is still acting suspiciously like a guy who might be running for president a little bit. Just this week, he posted another slick, totally not a campaign ad on the Speaker’s website:

Either way, Ryan is right about one thing: Donald Trump and the Republicans have always been cut from the same cloth.