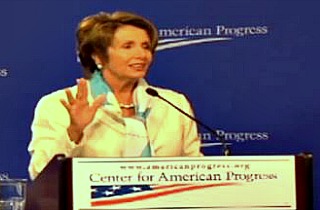 Speaking at the Center for American Progress (CAP) last week, House Minority Leader Nancy Pelosi (D-CA) appeared to confuse the language in the Declaration of Independence with the Constitution. Pelosi apparently lost her place in her prepared text and fumbled for a minute before referencing comments by the “founders,” but attributed a quote from the nation’s declaration of separation from Great Britain with America’s founding document.

“And so, it was 165 years ago — 165 years ago. Imagine the courage it took for those women to go to Seneca Falls and do what they did there, to even leave home without their husband’s permission, or father’s, or whoever it was,” Pelosi told the CAP attendees while attempting to recover her place in her prepared speech. “To go to Seneca Falls, and to paraphrase what our founders said in the Constitution of the United States: they said the truths that are self-evident, that every man and woman — that men and women were created equal and that we must go forward in recognition of that.”

“We hold these truths to be self-evident, that all men are created equal, that they are endowed by their Creator with certain unalienable Rights, that among these are Life, Liberty and the pursuit of Happiness,” is an oft-quoted sentence contained within the Declaration of Independence.

Watch the clip below via CAP: