Pelosi Responds to Trump Over Photo of Her with Russian Ambassador: Wasn’t ‘Secret’ Meeting

Pelosi Responds to Trump Over Photo of Her with Russian Ambassador: Wasn’t ‘Secret’ Meeting 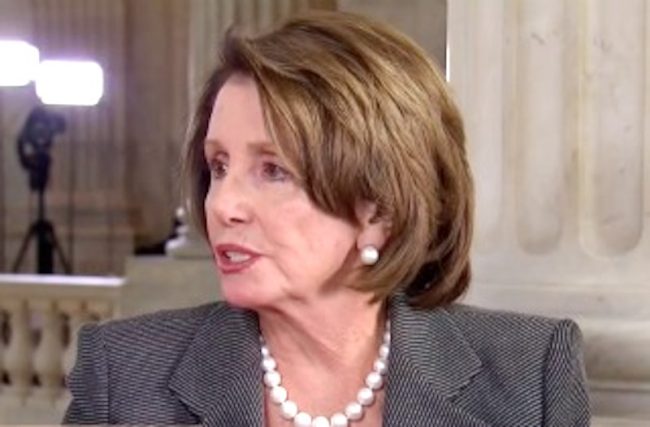 House Minory Leader Nancy Pelosi has responded to President Trump‘s tweet taking a shot at her for a photo of her with the Russian ambassador at the center of the Jeff Sessions controversy.

Because Sessions did not disclose his meetings during his confirmation hearing, Pelosi and a whole host of other Democrats have called this week for the attorney general’s resignation. Trump today has accused both Pelosi and Chuck Schumer of hypocrisy:

We should start an immediate investigation into @SenSchumer and his ties to Russia and Putin. A total hypocrite! pic.twitter.com/Ik3yqjHzsA

I hereby demand a second investigation, after Schumer, of Pelosi for her close ties to Russia, and lying about it. https://t.co/qCDljfF3wN

This is how Pelosi has responded:

For the record, Pelosi had initially said earlier today that she had not met with the ambassador, but after Politico uncovered the photo, a spokesman said this:

Asked to square Pelosi’s comments with the photo of the meeting, a spokesman said Pelosi simply meant she never had a solo meeting with Kislyak.

“Of course, that’s what she meant,” said the spokesman, Drew Hammill. “She has never had a private one-on-one with him.”