Petition Attempts To Get Betty White To Speak At DNC

Petition Attempts To Get Betty White To Speak At DNC 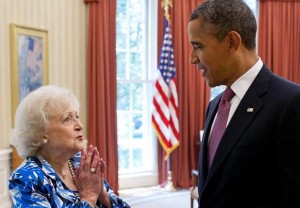 The Democrats already have a spate of celebrity speakers and performers at the DNC convention in Charlotte this week, but some activists are hoping for one particular celebrity to show up to counter last week’s RNC speech by Clint Eastwood. A petition on Change.org is calling for none other than Betty White to introduce President Obama at the Democratic National Convention on Thursday.

White endorsed Obama back in May, and the president made a surprise appearance during White’s 90th birthday celebration on NBC in January. Now a group of Democrats are hoping White gets a chance to speak at the convention leading up to the president’s speech on Thursday. The Change.org petition blasts Eastwood’s speech, which, you’ll recall, was ten minutes of the Hollywood icon scolding an empty chair, as giving a “bad name to older Americans everywhere” and calling for the Democrats to rebut with White.

Governor Romney can have Clint Eastwood and his improvisational skills because President Obama has the one and only Betty White!

Take action today if you want to see a real [old] Hollywood icon get a political introduction right!

As of this post’s publication, the petition has over 8,500 signatures. A Facebook page called “Bring Betty White to the DNC” has almost 30,000 likes so far.

Do you think Betty White would be a good choice for the DNC? And, more importantly, what piece of furniture should she bring on stage with her?