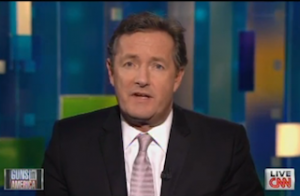 Last night, Piers Morgan went head-to-head with Alex Jones, the man who created the petition to deport him from the United States. The climax of the fiery debate came when Jones shouted at Morgan that “1776 will commence again if you try to take our firearms!”

Piers Morgan spoke to POLITICO this morning about the highly charged interview, saying that Jones “was the best advertisement for gun control you could wish for.” He went on to say, “that kind of vitriol, hatred, and zealotry is really quite scary. I didn’t feel threatened by him, but I’m concerned that someone like him has that level of influence. There’s got to be a level of discourse that can rise above what happened last night. It was undignified, unedifying.”

While Morgan did not feel afraid for his personal safety, he reiterated his fear of Jones’ media reach. “He said last night that his show now airs in 140 networks, he has a huge online presence — every day his message gets sent out to millions of Americans. Through vitriol and rhetoric he is able to spur heavy gun sales and ammunition sales. He works off of fear.”

And though he was unable to have a reasonable conversation with Jones, he recognizes that there is some intelligence there. “He is clearly a smart guy under the craziness. Look, you could tell from the way he ranted that he’s not a stupid man. But that makes him more dangerous. There will be lots of people who follow him avidly who are not so intelligent, who believe everything he says.”

Ultimately, Morgan’s encounter with Jones only strengthened his dedication to the gun control issue. “After every shooting, America goes back to normal. The media come off the story, nothing gets done, the pressure on politicians dissipates. My intent is simply to keep this issue boiling along until the politicians act on it. Something has to be done.”

We can expect to see more debate about guns and their role in American society in the coming weeks and months. After the inevitable ratings increase from last night’s show, Piers Morgan’s gun discussion isn’t ending any time soon.