Piers Morgan Tells Mediaite His Competition Is “Self-Indulgent”; “I Like Controversy” 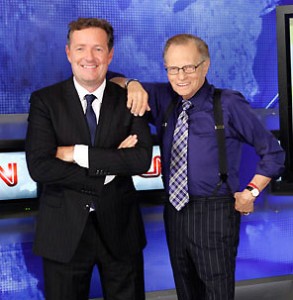 In a surprise move when it was first rumored months ago, CNN confirmed today Piers Morgan will will be their new 9pmET host, beginning in January.

Mediaite talked to Morgan this afternoon about his “self-indulgent” competition, his new colleague Eliot Spitzer and more.

Mediaite I watched a few of your Life Stories shows, with Gordon Brown, Simon Cowell. There was probing questioning that some would contrast with Larry King‘s style. Will you bring that to CNN?

Morgan: That was one of the reasons they wanted me, those interviews you’ve seen. CNN saw the way I do interviews – it’s an individualistic style. It’s different, and I think it will seem quite fresh to an American audience. It plays to journalistic background, being probing, but with a twinkle in my eye. You can be quite probing and tease out of people what they’re really like.

Mediaite: You’re known more as a journalist in England, but in the U.S. people know you from game shows and talent shows. How do you combat that perception here?

Morgan: I don’t intent to combat it at all. People know me for winning The Apprentice and being a judge on the number one rated show, America’s Got Talent, for five years in the summer. Those are not badges of dishonor…I’m very excited. What I hope to bring is a fresh way of doing interviews – be surprising to people, unpredictable, hopefully revelatory. People will come on and enjoy it, and feel like they have to have a long cold shower afterward.

Mediaite: The competition at 9pmET will be Sean Hannity and Rachel Maddow. How familiar are you with them and their programs?

Morgan: Who? No, I’ve watched them all, and they’re all very good. I love watching the cable hosts at 8, 9, 10, I’ve spent a few years here, I’m very familiar with Bill O’Reilly, Rachel, Keith Olbermann. What I’m aware of is they’ve done well in the short term in ratings with the left-right, ranting style. But they’ve increasing gotten self-indulgent. They increasingly talk about each other. Rachel talking about Bill, Bill talking about Keith, Keith talking about Glenn and Bill. It’s all a bit of a laugh. I’m sure it’s all quite interesting to them, but I wonder how interesting it is to a bigger audience that is potentially getable. I’m interested in the hundreds of millions of Americans who don’t watch cable news at all. (Ed. Note – it’s worth noting that Bill O’Reilly has been on the air for much longer than his MSNBC counterparts and Fox News’ ratings have been dominant for much longer than “short-term”)

Mediaite: Eliot Spitzer and Kathleen Parker will be your lead-in. If you had Spitzer on your show, what would be something you’d ask him?

Mediaite: You’ll be based in New York, and one of the stories right now is about the “Ground Zero Mosque” controversy. What’s your opinion about that?

Morgan: I have an opinion, I have a lot of opinions, but I don’t intend to spout it out. I would get an interview with the Imam. What a fantastic scoop that is for CNN, and another reason I wanted to come to this network. What that guy has to say is much more relevant and interesting than what I have to say.

Mediaite: Last thing: CNN is a big fan of Twitter. Do you have any plans to join?

Morgan: I have always been slightly skeptical of Twitter, bordering on hostile. I understand now that I’m at CNN, I may have to think about it this year.

This has been edited for length and clarity.