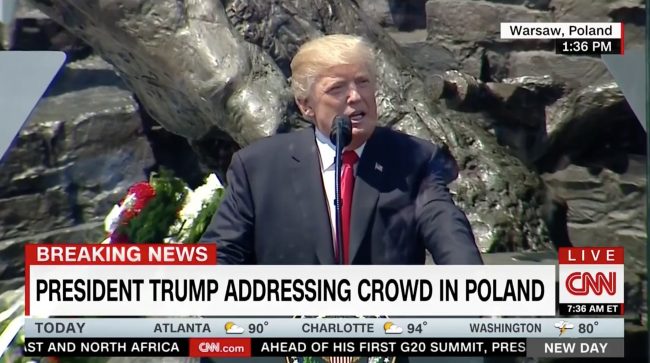 President Trump opened the second foreign trip of his administration by visiting Poland, the Eastern European ally to the United States that just so happens to have a right-of-center and nationalistic President that employs a similar provincial approach that got Trump elected last year. In doing so, Trump continues a worrying trend of only appearing in “safe spaces” far away from any critical dialogue, which is far from the “tough guy” myth he and his supporters like to promote.

The Polish government’s “Pro-Trump” position is something of an outlier compared to Western European allies that have been more vocal in their criticism of Trump, so it’s no surprise that an American president so concerned with optics would go to a country eager to make Trump look good. It was reported that the Polish government even promised that he would be greeted by “cheering crowds” by busing in supporters. But the visiting of a small and friendly nation to help boost one’s image is not a new tactic.

President Bill Clinton did something  very similar with his trip to Northern Ireland in 1995, at a time when he was particularly embattled and enduring low poll numbers. The visuals of Clinton enjoying a great reception was seen by some as a turning point for then President Clinton, but this is just President Trump’s second foreign trip as a world leader.

And you know what? It kinda worked. Trump’s speech in Warsaw’s Krasinski Square looked particularly presidential, especially since there was next to no protestors visible to viewers on television.

The administration’s decision to use Poland as a “safe space” for Trump to start his trip could be a savvy political move, but also entirely consistent with a White House approach of avoiding conflict and confrontation from even potential critics. The best example? Trump’s almost incestuous relationship with Fox & Friends, a program that has been described as an “informercial” for the president that features soft-ball interviews akin to “state run TV.”

This is not a critique of our Polish allies. Their red-carpet welcome to the sitting U.S. President is not just acceptable practice in the world of statesmanship, but should also be lauded, even if it employed a bit of stagecraft and casting.

This is about Trump’s apparent fear of going to any place that’s not willing to bend over backwards to help portray him in the most glowing light, and the incongruity of his own “tough guy” image. Or asked another way, why does Trump seem so terribly afraid of tough questions and unfriendly environments? That’s not the character of a leader eager to face his foes, it’s the actions of a coward. And Trump’s confusion of negative news with “fake news” — and tiresome harping on the “mainstream media” — only reinforces his inferiority complex.

With the G20 Summit coming up next, Trump is heading to more a formidable forum in the days to come, so this trip to Poland is like a classic warm up act for a headlining engagement. But one wonders if a president accustomed to overly-friendly environs will make him a little less prepared when he actually comes across anyone not eager to make him look good no matter what.

President Trump’s most vocal supporters love to celebrate his “alpha male” status and often extol the virtue of being alpha. But as any parent of a tween can tell you, bullies act the way they do because of a deep-seated inferiority complex. In any other scenario Trump’s behavior might merit empathy. But he’s the most powerful person in the world, so his constant harping on often deserved criticism and fact checking is sad and pathetic, and scary.

A staged event in Poland or softball interview by a Fox & Friends may help our President feel better about himself but it should make the rest of us feel more than a little queasy.

Colby Hall is the Managing Editor of Mediaite and has real-life experience with bullying tweens. Follow him on Twitter here.