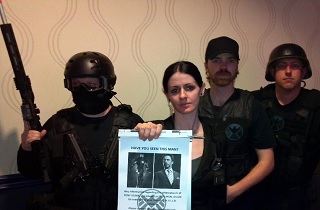 A movie theater in Jefferson City, Missouri is taking a lot of heat for a weekend publicity stunt to promote the opening of blockbuster superhero three-quel Iron Man 3. Police in Jefferson City responded to several 911 calls when movie patrons mistook an actor in full tactical gear, armed with fake guns, for an active shooter. The stunt shook up several customers, but the theater’s manager, when asked if he had any regrets about the stunt, said “No, my job is to entertain people.”

“We received a series of 911 calls stating that a man dressed in all black and body armor and a rifle was walking into Capital 8 Theaters,” said Capt. Doug Shoemaker.

Officers thought they were responding to an active shooter investigation.

“Everything was in place, it’s the opening night of a superhero movie, it’s somebody walking in all-dark clothes, everything pointed to bad things about to happen,” said Shoemaker. “There’s really no good that can come of this.”

Instead, it was all part of a publicity stunt for the movie opening. The man in tactical gear was an actor carrying a fake gun.

The station interviewed theater manager Bob Wilkins, and asked him if he had considered last year’s mass shooting at a superhero movie opening in Aurora, Colorado. “Absolutely,” he replied. “That’s my number-one priority every day. It’s the safety and security of our guests.”

Asked if he had any regrets about the event, Wilkins replied “No, my job is to entertain people.”

Now, there’s really no excuse for having a guy dressed, essentially, as the Aurora shooter show up to your Iron Man 3 premiere, but news reports of this incident are leaving out a key fact that makes the idea seem marginally less stupid. I’ve seen Iron Man 3, and I don’t remember if there were any armed guys in tac suits in it, but even if there were, why on earth would a movie theater manager single out that particular element for use in an on-site promotion?

The answer is that they didn’t. If you go to the movie theater’s Facebook page, you can see that the opening also featured a costumed Iron Man, a tiny Captain America, and a Nick Fury impersonator. The actors in tactical gear were agents of S.H.I.E.L.D., recruited from COSPLACON, and the guns in question have bright orange tips. However, that lead SHIELD agent doesn’t appear to have followed COSPLACON’s weapons policy, which states:

All weapons must be “peace bound”. This should be done when you register, if not before registration. A peace bond is a very visible lock or brightly colored tie (usually a zip-tie) on a realistic looking weapon to make clear to security and to police that it is not intended to be used for violent purposes.

That is not to say that moviegoers should be expected to immediately identify the S.H.I.E.L.D. credentials and orange-tipped guns, or that these features make the costumes any less upsetting, but it does mean that the theater manager didn’t just seek out a guy in shooter garb. It was a stupid mistake, and the manager doesn’t seem to have learned from it, but there’s no reason to oversell it by leaving out relevant details.