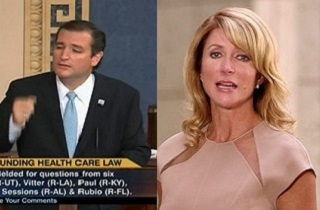 Senator Ted Cruz (R-TX) just finished up a 21-hour stretch of speaking on the floor of a legislative chamber, a feat that Politico‘s Dylan Byers thinks is “more or less the same thing” as State Sen. Wendy Davis‘ (D-TX) 11-hour filibuster of anti-abortion rights legislation in Texas earlier this year, and proof of “media bias.”

Sen. Ted Cruz has been speaking on the Senate floor for almost 19 hours, as of this post. The talk is not technically a filibuster — he can’t actually block the Senate from going about its business — but symbolically, it’s more or less the same thing. The point is to show one’s opposition to something through a demonstration of physical will.

Which is why you can forgive conservatives for being upset with the mainstream media’s coverage of the Cruz affair. When a Democrat like Texas state Sen. Wendy Davis filibusters against abortion restrictions, she is elevated to hero status, her tennis shoes become totems. When Cruz grandstands against Obamacare, he is a laughingstock in the eyes of many journalists on Twitter, an “embarrassment” in the eyes of The New York Times editorial board.

They’re both Texas politicians, and they both talked for a long time about something, but the similarities absolutely end there. As Byers notes, what Cruz did was not actually a filibuster at all, and didn’t serve to delay anything, not even symbolically. Wendy Davis’ filibuster was actually a filibuster, and with a little help from her friends, actually did prevent the Texas legislature from passing the legislation she was protesting, running out the clock on a special session that was called in order to subvert the chamber’s regular order.

That detail alone ought to be enough to collapse Byers’ premise, but there’s much, much more. Ted Cruz’s pretend filibuster was of a bill that he, himself, demanded House Republicans pass, while Davis’ real filibuster was to stop a law that she was actually opposed to.

Wendy Davis stopped the Texas legislature (in that special session) from passing a law that was clearly unconstitutional, while Cruz was pretending to stop a law that has already been passed, signed into law, ruled to be constitutional, and has been the subject of two presidential elections.

Ted Cruz peppered his fake filibuster with comparisons of his opponents with Nazis, Wendy Davis did not. Wendy Davis was called a “terrorist.”

Ted Cruz faced no obstacles to his fake filibuster, and was spelled for long stretches by his colleagues, while Wendy Davis had to fight off constant parliamentary challenges, one of which forced her to be helped over the finish line by hundreds of supporters, at which point the Texas GOP tried to cheat anyway.

What Byers describes as “more or less the same thing” could not be more different, and had Wendy Davis engaged in any of the objectively nonsensical conduct that Ted Cruz did, fake-filibustering her own bill by invoking Nazis and the moon in order to obstruct an already-existing, Supreme Court-approved law, Byers might have a case to make.

Then again, how differently did the media treat Cruz and Davis, anyway? Byers mentions the Twitter mockery that Cruz has had to endure, but Wendy Davis was called a terrorist, a “Retarded Barbie,” and “Abortion Barbie,” and subjected to other forms of sexism. On that count, Byers takes pains to point out Wendy Davis’ “glowing Vogue profile,” but apparently missed the Ted Cruz profile in GQ, which even delved into the footwear that Byers claims is getting short shrift. Byers also mentions Wendy Davis’ post-filibuster television appearances, which can’t be measured against Ted Cruz’s post-fake-i-buster period yet, but based on recent history, does Byers really think Ted Cruz will have trouble finding a television camera to point at himself?

Ted Cruz is getting as much, or more, media attention than Wendy Davis did, and he’s gotten it before, during, and after. The national media didn’t cotton on to Wendy Davis until her actual filibuster was well underway.

When you get right down to it, all of the differences between Wendy Davis and Ted Cruz, and all of the alleged disparities in coverage, can be described in one word: merit. On the merits, what Wendy Davis did earned her the coverage she got, as did Cruz. What’s really disturbing about Byers’ critique is that he seems to realize this, and doesn’t seem to think that the merits matter:

But, part of the disparity in coverage is due to the fact that the mainstream media, generally speaking, don’t admire Cruz the way they admired Davis — or rather, they admire him only insofar as he makes for tragicomic theater, whereas they admired her on the merits.

Keep in mind, the mainstream media had no idea who Wendy Davis was before her filibuster, so Byers is describing the merits of what she did. He then describes some of the negative press that Cruz has gotten, and comes to this conclusion (emphasis mine):

These portrayals may be accurate or inaccuarate — Cruz certainly has an elitist strain and he certainly has political ambitions. But that’s not the point: The point is that the coverage of Cruz has been critical, and in some cases unforgiving, from the outset.

If you read Byers’ entire piece, you won’t find a single instance in which he suggests that anything about the coverage of these two disparate events was inaccurate, or even unfair, beyond the fact that they weren’t treated the same. But they weren’t the same. The merits matter.