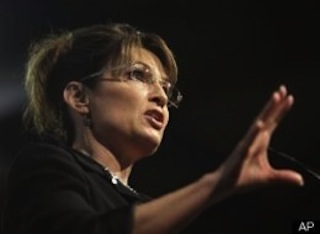 We missed this when it came out a couple days ago so thank goodness it caught Andrew Sullivan’s eye because it may be the funniest official statement from a company ever. In her big Newsweek interview, Sarah Palin told a story that used Slim Jims™ to illustrate rising food prices. PolitiFact was then asked to determine if her story was accurate and got a comment from Jim himself!

Ok, not really. But it was from the company and it is hilarious.

“‘I was ticked off at Todd yesterday,’ she said. ‘He walks into a gas station as we’re driving over from Minnesota. He buys a Slim Jim—we’re always eating that jerky stuff—for $2.69. I said, “Todd, those used to be 99 cents, just recently!” And he says, “Man, the dollar’s worth nothing anymore.” A jug of milk and a loaf of bread and a dozen eggs—every time I walk into that grocery store, a couple of pennies more.'”

Obviously, there’s a lot of times politicians (be they Republican, Democrat, or Galactic Empire) tell little anecdotes like this where it can be assumed to be more allegorical than factual. Everything from describing “the little old lady from Main Street, South Kenkota” to Palin’s folksy stories (And could this be any folksier? I don’t think there’s any word in here that couldn’t be translated as “I’M JUST LIKE YOU! JUST LIKE YOU! JUST LIKE YOU!”). Still, Palin uses some hard numbers here and that’s asking to be checked up on. PolitiFact could have gone the easy route and just checked Slim Jim prices across the country, but they went all out, procuring this quote from the Slim Jim company:

Teresa Paulsen, a ConAgra spokeswoman, said that ‘we admire Mr. Palin’s taste and appreciate his support,’ but added that ‘we haven’t raised the price significantly on any Slim Jim products.’

She also offered a possible explanation for the confusion. ‘Our iconic Slim Jim Giant Sticks are priced around $1.30,’ Paulsen said. ‘Mr. Palin might have been reaching for one of our Slim Jim Monster Sticks, which offers double the meat for $2.30, or our Slim Jim Kippered Beef Steak, which typically sells for around $2.65.’

Finally, Paulsen said, ‘If the Palins want to try something that brings a little extra heat, we’d invite them to try our new Slim Jim Dare sticks. We’d love to know what a seasoned Slim Jim connoisseur thinks.'”

Oh, man. I love statements from companies like this so much. The ones where you can just feel the spokespeople going through every single syllable a thousand times to make sure they can protect the brand without insulting any demographic. And, if the statements include phrases like “Slim Jim Monster Sticks,” it’s even better.

Again, thank goodness for Sullivan and especially PolitiFact. My day has officially been made.