Poll: Guns Make People Who Own Them Feel Really Safe; Everyone Else Not So Much 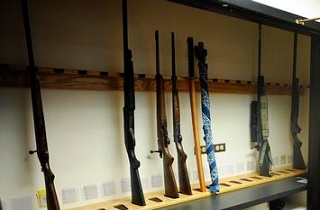 An item on a new Washington Post/ABC News poll caught my eye this morning with the headline “Majority of Americans say guns make homes safer,” a declaration that’s narrowly supported by that poll, but which draws a fairly useless conclusion. Well, useless to news consumers, but very useful to a particular strain of conventional wisdom that says people will just give up on gun reform as the embers of Newtown cool, and the dust settles on the ruins of the senate’s sabotaged attempts at reform. While 51% of respondents did say guns make homes safer, a millimeter-deep look at the numbers suggests a far more obvious, and useful, takeaway.

The WaPo piece, by Scott Clement and Peyton Craighill, opens with the conclusion that the Newtown shootings changed nothing:

The failure of popular Senate gun proposals Wednesday affirmed — even in the wake of Newtown shootings — the rigidity of the politics on the issue.

Lost amid the debate is the fact that for the first time a majority of Americans say having a gun in the household makes it a safer place to be, according to a new Washington Post-ABC News poll. By a wide 51 to 29 percent margin, more people say a gun in the house makes it safer rather than more dangerous.

That’s the narrative-setting purpose of this analysis, and it’s followed by a very predictable breakdown of the respondents to this question, including a big, muddy chart that at once obscures and demonstrates the most obvious, most instructive takeaway from this poll: 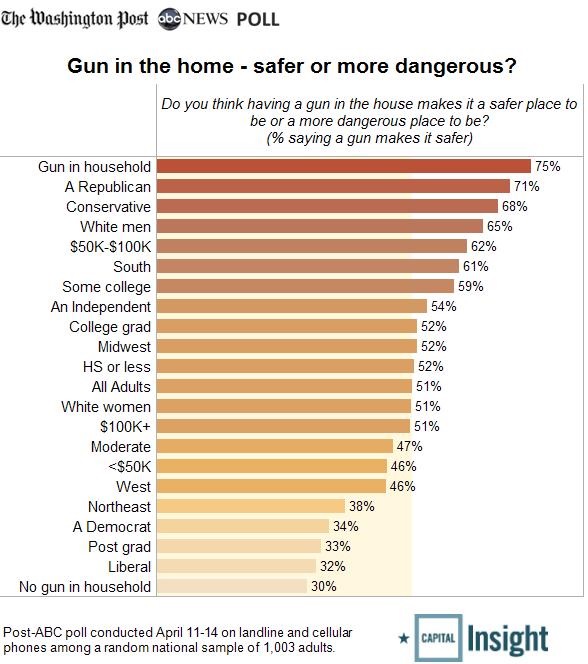 At a glance, the top and bottom ends of this chart are about what you would expect, and pretty clearly show that the stuff in the middle is peripheral, at best: If you have a gun in your house, you’re very likely to think it makes you safer, and if not, then you’re about as likely not to think so. I’d have liked to have seen that 30% with no guns asked the obvious followup, “If you think guns make households safer, why don’t you have one? Is ‘Danger’ your middle name?”

That effect, though, is magnified when you drill down on the 75% of people in gun-owning households who think it makes their house a safer place to be, which leaves 25% who do not. Of those people who live in gun-owning households, 31% do not own a gun themselves. If you make the fair assumption that almost all of the people who actually own the guns think they make their homes safer, that means that almost all of the people who don’t personally own a gun, but live in a household with one, don’t think it makes them safer. Unfortunately, WaPo doesn’t appear to have cross-tabbed this question, but it’s fair to draw the conclusion that a non-gun owner who lives with a gun is less likely to feel safe than a non-gun owner who doesn’t live with one.

Also of interest is the fact that the percentage of people who think guns make a home a more dangerous place, 29%, almost exactly matches the 30% of respondents who said they had been victims of a gun crime, or were close to someone who had. Everyone who owns a gun thinks they’re safe, until they’re not.

There are a couple of questions to watch from this poll, which will help to predict how the gun issue’s momentum might affect upcoming elections. Although the poll showed very strong support for bans on assault weapons and high-capacity magazines, at 56% each, and 86% for background checks, only 14% said they had ever contacted a public official about gun control, and only 10% had ever donated money to an organization involved in the gun control issue. In order for gun control to make a difference in future elections, that level of engagement must increase. This is not a majority/minority issue; the minority is winning. This is about intensity.