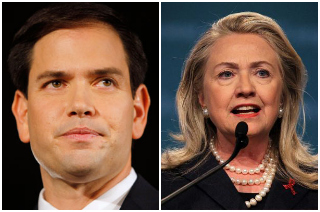 A new poll showing infinitesimal gains among Hispanic voters bristled the GOP on Tuesday, as the supposed rewards of the party’s moderation on immigration seem, for now, not to be materializing.

The poll, courtesy the left-leaning Latino Decisions, pitted various potential GOP 2016 candidates against Hillary Clinton and Joe Biden, and found both Democrats trouncing any and all Republican opponents. Clinton whupped Rubio 66-28, and Biden beat him 60-28, though Rubio did outperform the rest of the GOP field by a 2:1 margin.

The major takeaway, though, is the lack of movement of GOP candidates from Mitt Romney’s woeful 2012 showing among Hispanic voters, which was the impetus for the GOP establishment’s sudden sense of urgency for immigration reform, which was to salvage the party’s image with the country’s fastest-growing demographic. But Rubio fared only one percentage point better than the man who never wanted to be president. One point in a poll is a statistical blip, hardly the payoff the Republicans expected from their moderating push over immigration, and a poor return on Rubio’s immolation of his conservative credentials.

However, the poll also found that when prompted about Rubio’s role in the gang of eight’s bill, with specific mention of a pathway to citizenship, respondents were much more favorable to Rubio. The Florida Senator is still something of a neophyte on the national political scene, so voters may not have yet familiarized themselves with him. This suggests that the immigration bill still has the opportunity to bolster Rubio’s presidential chances, though it remains to be seen whether such benefits would extend to the party as a whole.

As always with polls, a comically large number of caveats apply: national polls measure general mood, not performance of specific election models; they have high margin of error; 2016 is a long, long ways away, and at this point in the 2008 election Barack Obama was a Senator with a funny name. It should also be noted that immigration reform hasn’t passed yet, may not pass, or may only pass in ugly, border-militarized form, and that in the meantime Rubio has publicly waffled over his support of it in order to keep conservatives on board; it’s possible he’ll receive more credit once the legislation passes and the various machinations are abstracted away.

By the by, if you want to see the feckless, centrist-to-the-point-of-misleading take on this poll, see—who else?—Politico.

Read more about the poll here.