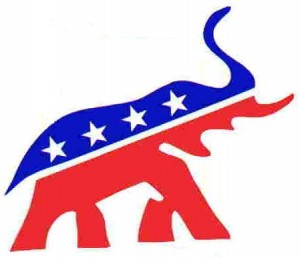 For one, more than half of those polled identify as supporters of the Tea Party movement. And then there’s the matter of the so-called “birther” movement:

So how, then, do these voters feel about Donald Trump – a possibly-maybe potential candidate who has made Obama’s place of birth the focus of his many interviews and television appearances? The poll results show that the bulk of participants do not believe the business man and television star will even run:

The favorite, at this point, is none other than former Arkansas governor and current Fox News host Mike Huckabee, who enjoys the support of over half of Republicans polled, with only 11 percent holding an unfavorable view.

Does this mean GOP candidates will make (or, in some cases, continue to make) Tea Party priorities and the birther issue the foci of their campaigns? It seems murky, especially when “old school” Republicans like Karl Rove feel “birtherism” is basically a distracting waste of time, and Michele Bachmann – who is, for all intents and purposes, the public face of the Tea Party moment within DC – telling GMA that she “guesses” the birth certificate story is now “over.” So, will this still even be an issue on people’s mind come voting time?

And, perhaps more importantly, would a candidate who speaks to the majority of Republican voters still be able to successfully unite factions within the GOP?