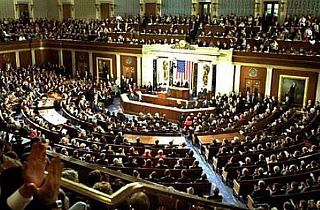 A new Washington Post/ABC News poll shows that the public strongly disapproves of every major player in the debate over the federal budget which led to a government shutdown last week. Majorities greatly disapprove of Congressional Democrats and Republicans in this poll. Even President Barack Obama receives low marks from both voters and adults over how he has handled negotiations.

In a sign that the public is blaming both sides in Congress relatively equally for their failure to negotiate prior to the government shutdown, Congressional Democrats are receiving a significant amount of blame from the public.

When asked of registered voters, 64 percent of respondents said they disapproved of how Democrats have negotiated over the federal budget while just 34 percent approved.

Congressional Republicans fare no better in the latest WaPo/ABC News survey. 70 percent of adults disapprove of how they have handled the budget negotiations, expanding to 71 percent when asked of only registered voters. 26 percent of voters approve of the GOP’s handling of negotiations, but only 24 percent of American adults expressed their approval.

The latest WaPo/ABC News survey found that 45 percent of adults approve of how President Obama has handled “negotiations over the federal budget” which led to a government shutdown last Tuesday. 51 percent of adults, however, disapprove of the president’s handling of the situation.

Only 52 percent of Republicans approve of how their party has handled budget negotiations while 7 percent of Democrats surveyed approve of how Obama has dealt with his Republican counterparts. “Among moderate and conservative Democrats, three quarters approve of Obama, up 11 points from last week,” the Washington Post notes.