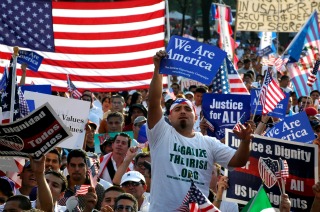 It looks like there is more bad news for the Republican Party on the horizon. The Democratic polling firm Public Policy Polling, surveying the voters in seven competitive congressional districts represented by GOP legislators, found that support for the Senate’s immigration reform plan is high. Furthermore, they find that Republicans will suffer the wrath of voters for opposing such a beloved plan. There is, however, a silver lining for the GOP in Congress: the immigration reform plan PPP tests with voters does not exist.

The chop-licking release from PPP is certainly disconcerting for Republicans. “New Public Policy Polling surveys in 7 Congressional Districts across the country find that key Republicans could be in trouble if the House doesn’t pass immigration reform this year,” the release begins.

The polls show two things:
• Republican and Independent voters want Congress to pass a solution to our country’s broken immigration system
• Many are less likely to support Republicans if the House fails to pass immigration reform this summer

That is disturbing news for the GOP’s supporters. Since the U.S. Senate passed a version of immigration reform, the bill appears stalled in the House. Many suspect that a version of the bill sent back to the Senate may end up shelving the reform process indefinitely. PPP suggests the political fallout from such a maneuver would be disastrous for the GOP.

They made this prediction by asking voters the following question:

There is bipartisan immigration reform legislation being debated in Washington. The bill would secure our borders, block employers from hiring undocumented immigrants, and make sure that undocumented immigrants already in the U.S. with no criminal record register for legal status. If a long list of requirements is met over more than a decade, it provides eligibility for a path to citizenship. Would you support or oppose this proposal?

Wow. All the bill fails to do is provide every American with a free ice cream cone. The fact that the survey could still find 17 percent of respondents who do not support this flawless proposal is actually the most shocking result.

Of course, if the Senate’s proposal guaranteed these enhanced security measures would be implemented, the bill would not be meeting with nearly as much opposition from conservative circles as it presently is. The problem the GOP is having difficulty overcoming is that these are hardly ironclad guarantees.

As explained in National Review today editor Rich Lowry and The Weekly Standard Editor Bill Kristol, two conservatives who are often at odds on ideological issues but are now united in their opposition to the Senate immigration reform plan, there is cause for doubt as to how likely it is that the bill’s enforcement provisions will be implemented.

The enforcement provisions are riddled with exceptions, loopholes, and waivers. Every indication is that they are for show and will be disregarded, just as prior notional requirements to build a fence or an entry/exit visa system have been – and just as President Obama has recently announced he’s ignoring aspects of Obamacare that are inconvenient to enforce on schedule. Why won’t he waive a requirement for the use of E-Verify just as he’s unilaterally delayed the employer mandate? The fact that the legalization of illegal immigrants comes first makes it all the more likely that enforcement provisions will be ignored the same way they were after passage of the 1986 amnesty.

This is just one significant flaw with a bill riddled with imperfections which are not reflected in the questions PPP poses to voters in order to construct their dire warning to Congressional Republicans.

The PPP poll presupposes that the GOP will be unable to communicate the flaws in the immigration reform plan to voters in such a way that it reduces the risk of an electoral backslash if the bill fails to pass Congress this year. But there is precedent that suggests the Republican Party may be in less danger than PPP implies.

The last time the Democratic polling firm warned of dire repercussions for lawmakers who opposed a liberal policy objective was when PPP warned of a “backlash” — in survey form, of course — against Senators who voted down a proposal to expand background checks for firearms purchasers.

The firm cited, among others, collapsing job approval numbers for Sen. Rob Portman (R-OH). Their survey found Portman underwater at 26 percent approval, 34 percent disapproval. They attributed the drop to his lack of support for gun control (while GLADD, meanwhile, linked the collapse to disappointment among his Republican base after backing gay marriage rights). Of course, that was in April. A Quinnipiac survey taken between June 18 – 23 shows Portman back up to the mid-40s in approval (44/26 percent approval) – slightly higher approval than Portman has had for most of the last two years.

While one could dismiss PPP’s result in the April survey as an outlier, it is possible that there was a minor backlash against politicians who failed to support the passage of an expanded background check regime. But the politicians who cast their votes against that plan had the opportunity to communicate to voters in the interim why they voted in the way they did. In combination with the passage of time, the backlash that may have been materializing simply dissolved.

Take the Casandras at PPP issuing warnings to Republicans regarding their opposition to the present version of immigration reform for what it’s worth – which, at this point in the 2014 midterm election cycle, is not much.