Concha: POTUS Blames the Media for Not Touting Obamacare Positives 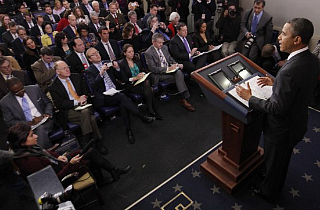 Mr. Obama had this to say:

Am I going to have to do something to rebuild confidence around some of our initiatives? Yes. But part of my job is…the things that go right…you guys aren’t going to write about. The things that go wrong get prominent attention. That’s how it’s always been. That’s not unique to me as president, and I’m up to the challenge.

Without the tea party and Ted Cruz to use as a piñata, the President attacked the folks whom he once joked was “his base.” But anyone watching The Kelly File on Fox Wednesday night could see this tired tactic coming, as Dr. Zeke Emanuel (who needs to be signed by MSNBC, like, NOW), the bulldog whom the administration is trotting out across cable news to defend the Bernie Madoff-of-a-healthcare-law-known-as-Obamacare, gamely took on cable’s newest primetime host. Here’s the exchange between Ms. Kelly and Dr. Emanuel, which was about as good as it gets on the unintentional comedy scale:

EMANUEL: There were differences about how they wanted to run it. They decided to run it with people in CMS having the charge for doing it. Remember, this was not an environment which was hospitable to setting up the exchanges. You and your colleagues were trying to underfund it and make sure that didn’t work.

KELLY: A lot of the criticism proved true.

EMANUEL: It’s a self-fulfilling prophecy. We’ll try to do everything we can to make it fail and then when it fails, we’ll say, why did it fail?

KELLY (almost laughing): Oh, I don’t think FOX News had anything to do with the roll-out of healthcare.gov. As far as I know we didn’t touch that website.

EMANUEL: You were constantly attacking the law and trying to make it underfunded.

KELLY (sarcastically): Yup. It was all our fault.

Emanuel’s argument mirrors a similar situation I had experienced last Sunday. I’m watching my Bears play the Lions at a sports bar in Jersey. One table over is a guy with money on Detroit, rooting as hard as possible against my team. And when Chicago lost in the final minute on a failed two-point conversion, he practically danced out of the bar.

If not for money-on-Detroit-guy, my team wins, right? Because just by wishing something was so, even saying it outloud, it truly has the ability to influence the success and failure of things like, you know, football games 1000 miles away and websites like healthcare.gov.

If this is the only argument Democrats have left–blaming media outlets for its failures–we’re all in big trouble.

Anyway, back to the President’s press conference today, it was only natural he point the finger at the press for not covering all the positive things about Obamacare. Things like: Higher premiums, higher deductibles, the millions of plans lost, the inability to sign up at all, the “incorrect promises” made (the New York Times’ term for lying)…it’s now painfully clear the media is hiding the real truth from the American people and therefore must be held accountable.

Last week, I declared on two different national networks (CNN, Fox) that Obamacare marked the end of Obama Presidency. It was an argument simply based on nothing more than math and logic: Sure, he’ll finish out his term, but without winning back Congress in 2014 thanks to the albatross that is Obamacare–and with few swing districts for the taking in the first place–a Democratic takeover ain’t happening. Consequently, Mr. Obama–already dramatically weakened in the span of one month–has become a rudderless ship without a port. Because if you think any politician will even think of proposing anything entailing expanded/bigger government now, you must be spending your nights with the mayor of Toronto.

As for his base, the media (most of it, anyway), they’ve already moved on to the sexier story: Hillary vs. Christie. The election IS just 36 months away, after all. But the President will still get a pat on the back for the effort to this point. After all, he did beat Gordon Gekko/Mitt Romney and considerably helped weaken the Republican brand throughout his tenure. His work is done in their eyes.

As for Hillary, she’s already distancing herself from the President in Secretariat-like fashion, with her shrewd husband already breaking out the whip.

With his fellow Democrats running for cover, the midterms hopeless, his only truly strong ally (Bill Clinton) already measuring the curtains, and no hope for any other major legislation passed in his final three years in office, this administration has now achieved Aflac status.

And that was just on MSNBC.

If the media should be reporting the positive stuff the President is accomplishing with his new healthcare law, he needs to hold up his end of the bargain.

Which is, of course, providing something, anything positive to report at all…