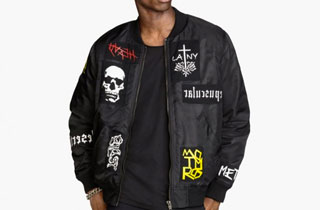 We never thought we’d put the words “H&M” and “fake Neo-Nazi metal bands” together, but here we go: yesterday, the music world became outraged by a misguided H&M campaign for its new brand of metal-themed clothing, in which they attempted to create completely fake backstories for some of the logos on their clothing.

Further investigation indicated that they created some white supremacist bands to sell the illusion. And then a prankster claimed responsibility for the whole thing, saying it was an attempt to teach H&M the consequences of commercializing a subculture they didn’t understand.

It all started when metal fans began receiving press releases from a group called “Strong Scene” productions, announcing their partnership with H&M to bring the music of a bunch of obscure, “old-school underground metal talents” to the public. These bands, with appropriately metal-sounding names like “MORTUS,” “MOTMROS,” and “MYSTIC TRIANGLE,” got their logos plastered all over H&M’s products, like that metal-looking jacket above.

But as Metal Injection reported, something seemed wrong. For one, these were bands no one had heard of — and they seemed to spring into existence less than a year ago, with lots of 1990’s-looking fake websites and fictitious songs like “Holocaust Tomb” and “Vaginal’s Juice Dripping Into Cadaverous” plastered on the internet. The conclusion: this was an attempt to create fake legitimacy to an ad campaign that they hoped would go viral.

It got really bad, however, when they discovered that two of the fake bands were associated with white supremacists:

Two of the bands seem to have ties to the NSBM scene (that’s National Socalist Black Metal aka racists/neo-nazis). For example, the bio of the band “The One” lists them as being a part of the official band page of the record label “National Heritage Pride.” The band LA/NY have imagery of Hitler on their band profile…

Why, oh why, would H&M even go anywhere near this sort of thing? Even if H&M isn’t behind this grand stunt and these bands are real, why would H&M associate with potential neo-nazis? Could it be that whomever H&M hired to manage this guerrilla marketing campaign thought it would be fun to put in a little easter egg troll to get the fashion label in trouble? So many questions, and yet no answers.

After a few confusing Facebook posts from Strong Scene disavowing involvement with H&M (“Some of you really think we are H&M behind this? That´s ridiculous! Are you on drugs? We love H&M!,”), Henri Sorvali of Finnish metal band Moonsorrow/Finntroll reached out to Vice’s Noisey and admitted: it was him, it was a prank, and it was a statement against corporate fashion trying to make their clothing look cool.

“We also wanted to point out the fact that you cannot commercialise a subculture without actually knowing all the different aspects of it,” Sorvali said. “Knowledge on your product is essential in marketing, and Strong Scene supports self-awareness and education for everyone on the matter.”

The purpose of the group (consisting of literally tens of people from different areas of music and media around Scandinavia) was to create discussion on the fact that metal culture is more than just “cool” looking logos on fashionable clothes, and has many more aesthetic and ideological aspects in different subgenres than what some corporations are trying to express. The metal scene is varied, controversial and a sort of a wolf you can’t chain into a leash and expect it to behave on your terms like a dog. Strong Scene as a collective has absolutely no political nor ideological intentions, and is only bringing the conversation to the level it should be discussed at.

Considering that H&M has sold some really awful clothes, like this Star of David With Skull shirt and this Star of David Patch shirt, it’s pretty understandable that people were willing to believe that they’d unknowingly created fake neo-Nazi bands for their clothes.