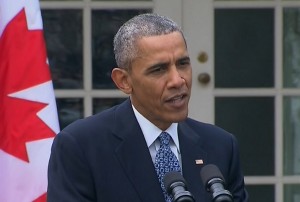 President Obama held a joint press conference with Canadian Prime Minister Justin Trudeau in the Rose Garden at the White House Thursday morning, and was asked to respond to the notion that he is to blame for the rise of Donald Trump to the top of the Republican presidential field.

A clearly amused and/or bemused President Obama called the premise “novel,” and said that conservative media outlets “have been feeding the Republican base, for the last seven years, a notion that everything I do is to be opposed.”

“I don’t think that I was the one to prompt questions about my birth certificate, for example,” the President added. “I don’t remember saying, ‘Hey, why don’t you ask me about that, or why don’t you question whether I’m American or whether I’m loyal, or whether I have America’s best interests at heart.”

The President also took aim at the other GOP candidates, observing that Trump’s positions don’t differ substantially from Ted Cruz‘s or Marco Rubio‘s, and pointedly criticized both men:

The President went on to refer to the 2016 primary as a “Republican crack-up” and a “circus,” and urged “thoughtful conservatives” to ” reflect on what it is about the politics they’ve engaged in that allows the circus we’ve been seeing to transpire.”

Watch the video above, from CNN.