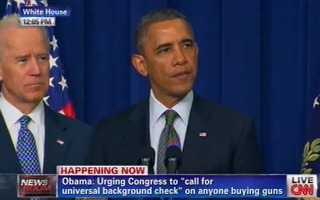 At the White House today, President Obama revealed the much-anticipated, (and weeks-early) proposals, from the Joe Biden-led gun violence task force, that he plans to push. While the media’s gyrations on the assault weapons ban have probably left many advocates of gun regulation feeling grateful it was even included, the legislative proposals that the President outlined this afternoon are exactly the ones he laid out when he announced Biden’s commission. No less, to be sure, but also no more.

Early on, before Vice President Biden began holding meetings with outside groups, reporting emerged that the Biden task force was considering a number of measures, including:

At his press conference this morning, though, President Obama called on Congress to “restore a ban on military-style assault weapons, and a 10-round limit for magazines,” and “to require a universal background check for anyone trying to buy a gun.”

That’s it, legislatively. The President did sign 23 executive orders, but his calls for legislation went no further than what he suggested at that Dec. 19 press conference. No national database, no federal gun registry, no confiscation. Seriously, though, even his announcement on the assault weapons ban called for a “restoration” of the expired ban, which didn’t go nearly far enough, and had a completely open-ended grandfather clause. It’s likely the new ban will be tougher, but this gives him cover to let it get whittled down significantly along the way.

This is still an encouraging start, because the markers the President laid down from the outset were pretty good, but don’t let anyone try to tell you this was an “overreach.” There’s every indication that a lot was left on the table.