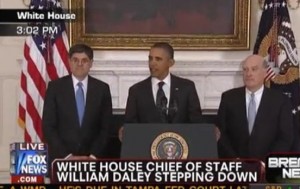 President Obama made a surprising announcement this afternoon, telling reporters that Chief of Staff Bill Daley has resigned, and will be replaced by Jack Lew, current head of the Office of Management and Budget. While the announcement is a surprise, it’s not much of a shock, since Daley’s role was significantly cut back in November amid reports of staff dissatisfaction, and even before then, insiders noted a lack of enthusiasm for the job on Daley’s part.

Daley was the first permanent replacement for Rahm Emanuel, who departed the White House for a successful bid to become Mayor of Chicago, and was succeeded by acting Chief of Staff Pete Rouse. Daley’s tenure saw frustrating gridlock between the White House and Congress, and his detached style was unpopular with White House aides.

The selection of Lew as Daley’s replacement is a wise move in an election year that figures to hinge on the economy. His expertise in that area, as the President noted in his remarks, is extensive, and with a crack reelection team doing the heavy political lifting, the wonky Lew will bring added substance to the role.

Here’s video of the President’s announcement, followed by a transcript:

Hello, everybody. Hope you all had a good weekend.

Last week, my Chief of Staff, Bill Daley, informed me that after spending time reflecting with his family over the holidays, he decided it was time to leave Washington and return to our beloved hometown of Chicago.

Obviously this was not easy news to hear. And I didn’t accept Bill’s decision right away. In fact, I asked him to take a couple of days to make sure that he was sure about this. But in the end, the pull of the hometown we both love — a city that’s been synonymous with the Daley family for generations — was too great. Bill told me that he wanted to spend more time with his family, especially his grandchildren, and he felt it was the right decision.

One of the things that made it easier was the extraordinary work that he has done for me during what has been an extraordinary year. Bill has been an outstanding Chief of Staff during one of the busiest and most consequential years of my administration.

We were thinking back, just a year ago this weekend, before he was even named for the job, Bill was in the Situation Room getting updates on the shooting in Tucson. On his very first day, Bill took part in a meeting where we discussed Osama bin Laden’s compound in Abbottabad. This was all before he even had time to unpack his office.

Over the last year, he’s been intimately involved in every decision surrounding the end of the war in Iraq and our support of the people of Libya as they fought for their freedom. He was instrumental in developing the American Jobs Act and making sure taxes didn’t go up on middle-class families. He helped us reach an agreement to reduce the deficit by over $2 trillion. And he played a central role in passing historic trade agreements with South Korea, Colombia and Panama. Given his past record of service as Secretary of Commerce, he was invaluable in all these negotiations.

So no one in my administration has had to make more important decisions more quickly than Bill. And that’s why I think this decision was difficult for me. Naturally, when Bill told me his plans to go back to Chicago, I asked him who I thought could fill his shoes. He told me that there was one clear choice, and I believe he’s right. So today I’m pleased to announce that Jack Lew has agreed to serve as my next Chief of Staff.

Let me begin, first of all, by thanking Ruth for allowing Jack to serve in what I know is one of the most difficult jobs in Washington. But Jack has had one of the other most difficult jobs in Washington. For more than a year, Jack has served as the Director of the Office of Management and Budget. As anyone who’s been following the news lately can tell you, this is not an easy job.

During his first tour at OMB under President Clinton, Jack was the only budget director in history to preside over budget surpluses for three consecutive years. And over the last year, he has helped strengthen our economy and streamline the government at a time when we need to do everything we can to keep our recovery going.

Jack’s economic advice has been invaluable and he has my complete trust, both because of his mastery of the numbers, but because of the values behind those numbers. Ever since he began his career in public as a top aide to Speaker Tip O’Neill, Jack has fought for an America where hard work and responsibility pay off, a place where everybody gets a fair shot, everybody does their fair share, and everybody plays by the same rules. And that belief is reflected in every decision that Jack makes.

Jack also has my confidence on matters outside the borders. Before he served at OMB for me, Jack spent two years running the extremely complex and challenging budget and operations process for Secretary Clinton at the State Department, where his portfolio also included managing the civilian operations in Iraq and Afghanistan. And over the last year, he has weighed in on many of the major foreign policy decisions that we’ve made.

So there is no question that I’m going to deeply miss having Bill by my side here at the White House. But as he will soon find out, Chicago is only a phone call away and I’m going to be using that phone number quite a bit. I plan to continue to seek Bill’s advice and counsel on a whole range of issues in the months and years to come. And here in Washington, I have every confidence that Jack will make sure that we don’t miss a beat and continue to do everything we can to strengthen our economy and the middle class and keep the American people safe.

So I want to thank, once again, Bill for his extraordinary service, but also his extraordinary friendship and loyalty to me. It’s meant a lot. And I want to congratulate Jack on his new role. I know he is going to do an outstanding job, so thank you.