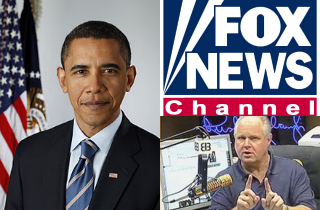 In a soon-to-be-released interview with The New Republic, President Obama reportedly laments the negative influence Fox News and Rush Limbaugh can have on the congressional debate over various pieces of legislation.

The president told TNR editor Frank Foer and owner Chris Hughes that “One of the biggest factors is going to be how the media shapes debates.”

The media can either help break or uphold partisan gridlock, the president said, adding that “If a Republican member of Congress is not punished on Fox News or by Rush Limbaugh for working with a Democrat on a bill of common interest, then you’ll see more of them doing it.”

The president also conceded that “[t]he same dynamic happens on the Democratic side,” but in his mind, “the difference is just that the more left-leaning media outlets recognize that compromise is not a dirty word.”

He claimed that “leaders like myself—and I include Harry Reid and Nancy Pelosi in this—are willing to buck the more absolutist-wing elements in our party to try to get stuff done,” as opposed to the opposing party which he views as obstructionist.

“[T]hat’s one of the biggest problems we’ve got in how folks report about Washington right now, because I think journalists rightly value the appearance of impartiality and objectivity,” Obama said. “And so the default position for reporting is to say, ‘A plague on both their houses.’ On almost every issue, it’s, ‘Well, Democrats and Republicans can’t agree’—as opposed to looking at why is it that they can’t agree. Who exactly is preventing us from agreeing?”

Obama also donned his media criticism hat and said that the cable news obsession with confrontation contributes to the gridlock environment in Washington: “Nobody gets on TV saying, ‘I agree with my colleague from the other party.’ People get on TV for calling each other names and saying the most outlandish thing,” he lamented.