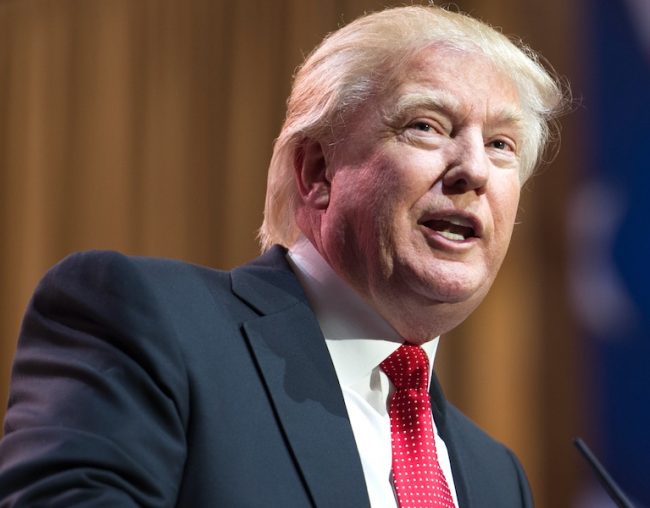 To the soon-to-be dismay of President Trump supporters, when the reality-TV-star-turned-most-powerful-man-on-the-planet said “the forgotten men and women of our country will be forgotten no longer,” he was actually talking about his plutocrat pals.

Less than a week on the job, and Trump’s already handing out candy to the wealthy. His tax cut plan—which is a version of George W. Bush’s tax cuts on steroids—is now being shifted to the unpaid for category.

That’s right: Trump’s team is mulling the notion of saying screw it, the tax cuts will pay for themselves through HUUUUUGE economic growth, so we don’t have to offset them with additional revenue or spending cuts.

If you remember, this worked out very well under President George W. Bush, who implemented two unpaid for tax cuts skewed heavily toward wealthier Americans; two unpaid for wars; a new, unpaid for entitlement system (Medicare Part D); and other pearls of economic mastery that led to an unimpressive decade of job growth in the 2000s while keeping the level of income inequality trucking along unimpeded.

It’s not just the fact that Trump’s tax cuts for the wealthy—which nonpartisan tax analysts have said will add between 10 and 11 trillion dollars to the debt while giving the wealthiest among us over $1 million in cuts this year—will most likely be unpaid for.

Trump, working with his Ayn Rand-loving Speaker of The House Paul Ryan, will be giving out huge goodies through repealing Obamacare.

According to the Center on Budget and Policy Priorities, the 400 richest families in America would get an average tax cut of $7 million per year while raising taxes on nearly 7 million low-to-moderate income Americans.

First, it would eliminate two Medicare taxes — the additional Hospital Insurance tax and the Medicare tax on unearned income — that both fall only on high-income filers, thereby cutting taxes substantially for those at the top.

-The top 400 highest-income taxpayers — whose annual incomes average more than $300 million apiece — each would receive an average annual tax cut of about $7 million, we estimate from Internal Revenue Service (IRS) data.

-This group’s tax cut would total about $2.8 billion a year.

-The roughly 160 million households with incomes below $200,000 would get nothing from the repeal of these two taxes.

Obamacare’s repeal will also raise taxes on working people through the removal of tax credits that helped low-income and minority people buy health insurance. For 2017, that tax credit is worth $4,800.

I’m sure the millions of blue-collar working class Americans who were swept away by Trump’s populist fire breathing will be swimming in a bed of Benjamins with policies like this!

Don’t get me wrong: Obamacare is definitely not the ideal healthcare system. It has NOT significantly reduced the cost of healthcare or reined in the insurance companies from price gouging. It’s also increased deductibles to frightening levels for a large swath of the country.

But, in the absence of a single-payer system—the one the rest of the industrialized world uses to great effect—it’s much better than the previous, your-shit-out-of-luck system that offered a death sentence to citizens with preexisting conditions.

Beyond Obamacare, the 45th president is reviving the Keystone XL Pipeline and the Dakota Access Pipeline: two oil pipelines that do NOT increase DOMESTIC energy or U.S. jobs but will certainly increase the already insanely large coffers of big oil executives and their shareholders.

Both pipelines will be used nearly exclusively for foreign exports—you know, the kind of business that makes fat cat oil companies richer but doesn’t lower the price of gasoline for the people who voted for Trump.

And, contrary to what the president says, these two pipeline will not create an explosion of jobs: pipelines create temporary jobs during construction, not permanent, good-paying jobs.

In the case of the Dakota Access Pipeline, the local North Dakota economy was stimulated more by water protectors flooding in to fight the pipeline—and spending money on supplies and other necessities—than jobs the pipeline created.

But, here’s the best part of all of Trump’s socialism for the rich: Republicans and establishment, corporate Democrats are shown to be the hypocrites they truly are.

These same folks who railed against Senator Bernie Sanders‘ “radical” policies steeped in Democratic socialism have no problem with the redistribution of wealth to plutocrats and their campaign donors.

And make NO MISTAKE ABOUT IT—these polices are indeed redistribution. You think wealthy folks get tax breaks and nobody pays for it? Payment time comes when leaders like Trump run up the debt and deficit and then rail about the need to cut spending.

What will get cut in order to shrink the debt he exploded in order to pay his rich pals? Education, police, fire departments, research & development, funds for critical government departments like the EPA, welfare, Medicaid, Medicare, and Social Security.

It’s called socialism for the plutocrats, where poor, low-income, and formerly middle class people pay for millionaire and billionaires to buy another yacht.

In reality, Trump’s not making America great again, because it’s been super duper great for a long time for wealthy folks.

Instead, he’s moonwalking America back again.