Pro-Obamacare Technocrats Present Worst Argument Ever: You Don’t Know What’s Good for You

Pro-Obamacare Technocrats Present Worst Argument Ever: You Don’t Know What’s Good for You 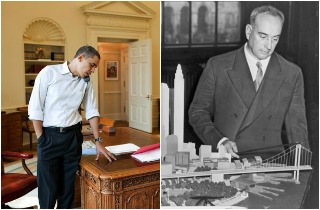 Towards the end of his life, looking back on a storied career which spanned decades and was marked by both Herculean achievement and overreach resulting in stinging admonishment from the public, New York City’s great Parks Commissioner, Robert Moses, embarked on a media tour with the aim of restoring his legacy.

By the late 1970s, Moses was more known for his failed attempt to bulldoze Greenwich Village in order to build an expressway, and his successful effort to do the same in the Bronx, than for the Triborough Bridge and the Long Island Expressway. In spite of his accomplishments, Moses’ media blitz failed to rehabilitate his image. He had only himself to blame.

“Let’s be sensible,” Moses told PBS in 1977. “How do you visualize the area that we cleared out for the Fordham expansion downtown? They needed the space. Now I ask you, what was that neighborhood? It was a Puerto Rican slum. Do you remember it? Yeah, well I lived there for many years and it was the worst slum in New York. And you want to leave it there?”

But he dismissed the fact that this “slum” was home to hundreds. This typically tone-deaf statement was brimming with a palpable and increasingly characteristic sense of grievance. Moses believed himself, as all technocrats do, to be shrewder and more capable than the members of the public he served. The commissioner had convinced himself that all opposition to his proposals was either unthinking or dishonest. And, to his disgrace, Moses often treated those who disagreed with him like they were either unthinking or dishonest.

The eerie parallels in this cautionary tale are relevant today. This week, the roll-out of the Affordable Care Act continues to disappoint supporters. It has, however, had the beneficial effect of exposing the true colors of a number of the commentary community’s most celebrated voices. We have learned who among us believe themselves to be a modern Robert Moses.

As the ACA rolled out, it became clear that millions of policy holders on the individual market would be losing their plans. On Monday night, NBC News revealed that the White House knew this would be the case all along. They revealed that a promise President Barack Obama had made to the public multiple times across two election cycles – that those who like their health care plans could keep them – was an outright, premeditated lie.

“Obama’s promise that people could keep their insurance was intended to convey that those who already had insurance through their job or through Medicare would not be forced into the new health-care exchanges,” explains New York magazine’s Jonathan Chait, recently revealed to be one of the president’s favorite political bloggers. “The designers of Obamacare straightforwardly believed that the regulation of the individual-health-insurance market was fully consistent with its promise, even though people already in that market were bound to face changes.”

Chait takes issue with Obama advisor Valerie Jarrett’s effort at damage control, when she claimed on Monday night that insurance providers and not the ACA were solely responsible for individual policy changes.

“Of course Obamacare is the reason so many insurance companies are changing existing plans,” Chait explained. That is not only a justified development but a welcome one.

Chait does, however, truly understand politics. He signs off with a note of concern about how the public will perceive what “currently feels like a lie” when the president insisted, repeatedly, that no one who did not want change would experience any.

This political concern does not phase the more self-assured policy blogger, Business Insider’s Josh Barro. Another Obama favorite, Barro burst out of the gate last Monday with a post praising the elimination of the individual market’s catastrophic coverage plan system.

If anything, the biggest problem with the ACA is that too many people are getting to keep their existing health plans. Our system of employer-based coverage distorts both the health care and labor markets, which is why health policy wonks left, right and center tend to want to move away from it.

“America doesn’t have a free-market health care system and hasn’t for decades,” he adds. “With taxpayer subsidies so embedded in everybody’s plan purchasing decisions, taxpayers have a legitimate interest in ensuring that health plans serve the public interest, not just private interests.”

In fact, Barro deploys this form of logic to support the insistence that the health insurance market is a “government benefit” which should be subject to massive top-down regulation. 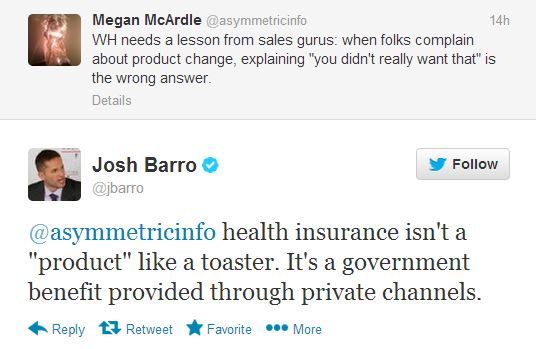 Using this line of thinking, one can think of a number of products and industries which receive federal subsidies, grants, or tax incentives that could also be subject to radical reforms in the name of the public good.

The technocratic conceit has always been that their judgment should supplant the will of the public. Their methods, they assure themselves, are always justified because the end is noble and the opposition is never arguing in good faith. If they were, the technocrat insists, there would be no opposition in the first place.

This kind of thinking vindicates so many otherwise indefensible ends, including subterfuge and much worse. The technocrats among us today justify the president’s lie because they believe the end is virtuous. And perhaps it is. But what they do not understand, just as Moses never understood, is that no end is justified by any and every means. In fact, a virtuous project can be made forever toxic if its proponents adopt dishonest tactics in order to achieve it.

The technocrats have too much faith in their own abilities to be bothered with such parochial political concerns. But they should. Robert Moses never got his expressways. In the same way, Josh Barro and Jonathan Chait may end up doing their own cause more harm than good.