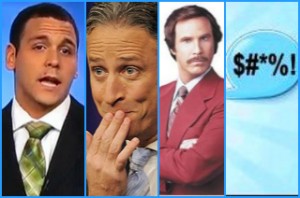 Disclaimer: If you’ve somehow never seen Anchorman, you’ll be at a complete loss for the first third of this column.

And shortly thereafter, not even realizing the horrific mistake he just made, Burgundy—the most celebrated member of the #1 news team based in a city allegedly meaning “a whale’s vagina” in German after being discovered by that country back in 1904—was immediately fired. Ron’s life from there was sad to witness, a disheveled mess without his beloved job and more beloved dog…a time when milk was always a bad choice. Miraculously, however, some unlikely events forced the channel to ask Burgundy back a few months later.

Fast forward forty years and into the real world, a young anchor in North Dakota named A.J. Clemente—whom you’ve almost been mandatorily made aware of by now–drops an F and S-bomb in succession to mark his first two words on the air. He, like Burgundy, was subsequently fired.

But unlike the character played by Will Ferrell, Clemente wasn’t then forced to eat cat poop at his favorite restaurant, wasn’t insulted by little girls in the street or lectured by a hard-to-understand (in Ron’s mind) bartender in the middle of the day. Instead, Clemente is the hottest thing to hit the interview circuit since Sully Sullenberger. Letterman, Live with Michael and Kelly, The Today Show…you name it.

Clemente semi-apologized for the gaffe, but also (wisely) used the stage to make a simple plea: Hire me.

Of course, producers that are part of the decision-making process in signing guys like Clemente will be tempted to do just that before being talked out of the idea by smarter executives. Hopefully, most understand that once the new car smell wears off, they’re stuck with someone who, you know, has to read a teleprompter every night without using profanity and stuff. And as we’ve seen from a show like HBO’s horrific Girls, once a show loses its shock value, there ain’t much left to compel anyone to watch anymore (Girls ratings thankfully fell nicely in Season 2 when viewers realized perpetual nudity does not a show make).

In Clemente’s case, he made more than a rookie mistake. Because once you walk onto a set, rookie or not, you MUST know better once a floor director hooks that mic up to your lapel right before a live show. In terms of the anchor’s job prospects moving forward, OK…he knows how to swear, just like everyone in this country seems to be increasingly doing lately. But unless someone is giving him an unregulated news program on HBO—and the only one that exists there is produced by Aaron Sorkin—what value does he bring? For if you watch that entire newscast after he makes the gaffe, Clemente never recovers and is visibly shaken throughout…a key indicator of his ability (or lack thereof) to put aside emotion in key spots.

So what is it about swearing that we as a society find so entertaining? The great Jon Stewart has been playing the same game on The Daily Show for years: Play an outrageous sound bite, cut back to the shocked, speechless host quickly…critique it pithily with a beeped f-bomb to drive the point home. And the audience always loves it.

It’s not just Stewart who knows the value swearing has in supposedly forbidden places with the public. To that end, perhaps another option for Clemente is CNN, who is also getting into the expletive act with its new hit show, Anthony Bourdain: No Reservations. On it, the network surprisingly allows the host to say the s-word, the f-word and “prolapsed butthole”, four words most assuredly not heard on its air prior. Ratings for Bourdain rose 30 percent off its premiere week and was ranked tops (in the key 25-54 demo) in its time slot among its cable news competitors last Sunday night.

But is the show successful because of expletives? The decision to allow obscenities unbeeped plays a role, sure…helps it stand out, look rebellious. But in the end, the program itself is compelling stuff for anyone who loves to travel and eat. The unfiltered language simply makes the show feel more real to some…

Arguably, more Americans swear than ever before. Some see it as a way to emotionally underscore a point, but most simply do it because of a lack of knowing a better word to put in its place. The f-word is particularly flexible and timeless, and can fit into almost any sentence or scenario. It’s used so often, you would think it would have lost its impact by now…but people—particularly more women—continue to say it without any remorse.

A.J. Clemente is a celebrity today, may be one tomorrow.

But by the weekend, he’ll be as forgotten as PSY and Gangnam Style on the national stage.

One place where he won’t be forgotten is the NBC affiliate he worked for in North Dakota.

If they were smart, they’d hire him back.

As we’ve seen time and again, Americans love an underdog.