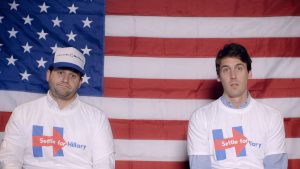 Mediaite: Did you ever have any issues getting past security? You said people didn’t really catch on, but were there any “Do Not Admit These Two People” posters circulating among Secret Service or anything like that?

DS: We got kicked out of a couple of places. One of them was kind of a corporate event, and the security there was much tighter than it was at any of the presidential rallies. And, yeah, we had like six guys surround us and escort us out immediately. So things did happen that way. But to get the shot — it was a constant tightrope walk. I mean, getting cameras in. They’re saying “no camera.” You have to go back to the car and get your small camera set up. You have to somehow get microphones in. To actually shoot a scene in a real setting of a presidential rally is very difficult. And depending on what they were allowing, we were having to finagle our way into these things under somewhat false pretenses. It was a real challenge. And we were able to shoot a whole movie. I still kind of can’t believe it.

JS: To that point we had a really dedicated crew. We had two really really talented camera people who were absolutely fearless. And they were taking on a lot of the same risks that we were, but you don’t get to see that on camera. Without those guys we just wouldn’t have any of the stuff we have. We wouldn’t have the footage.

Mediaite: Did you ever have a run-in with law enforcement?

DS: At almost all of them, yes.

JS: Jeb Bush, I think, was the — I don’t want to say scariest one — but they were very very angry. I don’t know if it was a campaign manager or who, but they had cops escort us out and basically threatened to ruin our future. I think they were under the impression that we were working for Marco Rubio though, because that’s the rumor that was circulating online. That Marco Rubio planted these seat-fillers to cause disruption at [Jeb’s] events. So they thought we were working for Marco Rubio and that we were young Republicans, I think. It was like this weird plan. All we did was hand out flyers and get up and say something, but it turned into — in the media — into this crazy thing of these two campaigns pointing fingers at each other. And we’re like: “Oh my God, it’s just a little plot point in our movie, guys. Chill out.” 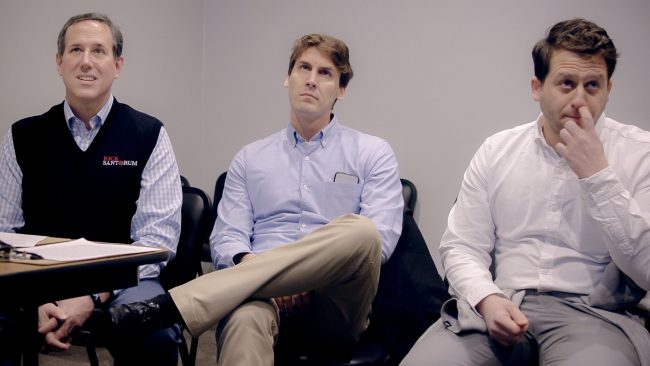 Mediaite: Has being on the campaign trail and following the election on a day-by-day basis changed your opinions about democracy and the election in any way?

DS: I think for me, especially starting in Iowa, the media makes it this huge thing — and it is a huge thing, we’re picking the next leader of the free world. But you go there, and it’s basically like high school assembly. People are like, “Please vote for me. I’m gonna do the best job.” And it really is democracy, it is kind of beautiful. But now, it’s a little disgusting where it is now with the media and the reporting of it. But while you’re there, it’s kind of beautiful. But it’s kind of sad at the same time.

JS: I think the epiphany that I had along the way is that, you think there are these super-intelligent people or bigger forces at work than us. But you just get the feeling that there’s no master plan whatsoever, that these are just people trying to fill auditoriums and get people excited. And a lot of them are stupid and a lot of them make mistakes. And there’s no gigantic master plan that’s being executed. It’s just like people reacting — sometimes to us — but reacting to the stories and to the momentum of the day and just trying to survive until the next day. Just trying to scrape it together. And it’s interesting, watching them react to the stuff that we did. I mean when Hillary Clinton put us in her campaign ad, it was like, “Okay, this is a problem for her now.”

JS: That was probably the craziest moment. It was a weird meta thing where now we are actually being used by the leading candidate to appeal to undecided voters. Crazy.

DS: It’s very interesting. We did our “Settle for Hillary” bit in New Hampshire months earlier. And then we’re in California, and a women who works for the campaign said to me right after we did our shirtless thing, she comes right over and whispers, “We haven’t seen you guys since New Hampshire,” and has this kind of wry smile. Like, they knew. They knew who we were. Or someone knew who we were. And then a couple days later we’ve got millions of views on this new campaign ad that’s using us. But it’s a strange world, I mean, like Jason said, it becomes super meta in that way. 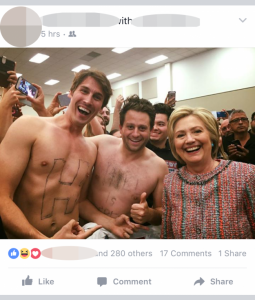 Mediaite: What are some of the stranger, more interesting, or perhaps scary interactions you had with supporters?

DS: I think that at Trump events, you get handled pretty roughly, I would say. But after Trump was getting that press about the violence at his campaigns, it seemed like the reactions of the other candidates were, “Let’s be understanding of whatever this is.” You know, so people were generally more patient than you’d think at times. I don’t know. For me, the Ted Cruz rallies were pretty strange places. It’s a strange group of people. And, yeah, it made for some interesting conversations with a cross-section of the population that I guess I just don’t relate to that much.

JS: The only time throughout the whole experience when I felt like I wanted to break character and get in the middle of something was outside of a Trump rally in California. There was a group of about five 20-something guys basically saying racist stuff. They were yelling at this probably early-20s girl, saying all sorts of racist stuff about Mexico and calling her fat and saying sexual things to her. And it was like I was in a bizarro world where there’s like two walls of people yelling at each other, saying the worst things you’ve ever heard in your life. And I just couldn’t even believe this was America. I was just, “This is crazy.” The hate that was there.

DS: And just to piggyback on that a little bit, the rally Jason is describing is about two hours after the shirtless Hillary rally. The atmospheres are so so different. You show up to a Trump rally and it’s a war zone outside. It’s like there’s riot cops and riot gear, people screaming, fists flying, bottles breaking. It’s like you’re in a war zone. And it’s really really surreal. And as Jason said, that stands out as one of the times when you want to do something. You forget you’re shooting a movie for a little bit, and it’s like: This is bad. This is a bad thing I’m witnessing right now. 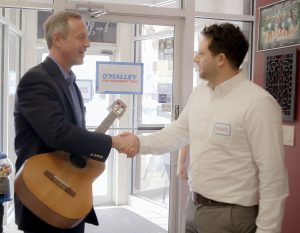 Mediaite: How did the armbands come about?

JS: I think we had the idea, might have been last year at the end of the year. And we planned to do it when we did the “Trump is boring.” And then once we started working on the film, the production company we were working with was able to make these really good looking armbands. And you’ll see in the film — I don’t want to give away the actual interaction with Fox News, like how it got on the air. But it’s very, very telling when you see exactly how it went down and why they put it on the air. It’s very very telling about how the media does their work.

Mediaite: How would you characterize the way the media does their work?

JS: Well, I’m not gonna talk about everyone. You guys, you’re the best website in the world. You guys should know that.

JS: Actually, we should give you guys credit for catching on to us right away and not making a story up, like “Who are these guys?” When you guys knew who we were. But it was very interesting how we approached them and how they decided to put it on the air and what they said and what we said.

DS: I would just characterize it as deciding how they wanted it to come across and reporting it as that and not actually what happened. So, you know, they jumped on it as an opportunity to report something that was in their interest and not necessarily exactly the truth. We just caught ’em in a little bit of a lie, that’s all.

Mediaite: Within the hour after Fox aired the segment, the producer Nick Kalman and Shepard Smith, who was the anchor, both tweeted that you guys were “professional trolls.” And then on Neil Cavuto’s show in the next hour, the reporter Carl Cameron went on and said that you guys had a “terrible sense of humor.” Would you like to respond to either of those charges?

JS: I take that as a compliment coming from him. And “professional”? I still work a day job, so I don’t know if I’m going to say “professional.”

DS: It all sounds good to me. I mean, he calls us “professionals.” He gave me an enormous laugh getting to see that on the air. So I can’t speak to my own sense of humor other than to say that that made me laugh. So I guess a thank you is in order because I still find it funny.

Undecided: The Movie will be released on Oct. 18 on Amazon and iTunes.

[images courtesy of Undecided: The Movie]
—