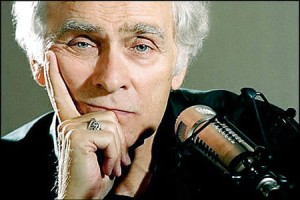 A corollary to Godwin’s Law states that as an Internet discussion grows longer, “the probability of a comparison involving Nazis or Hitler increases, and whoever makes that comparison has automatically ‘lost’ said debate.” Extending this axiom to the current state of American public discourse prompts a question: Should critics of a political figure who reflexively evoke Hitler be considered losers?

I don’t think Adolf Hitler ever executed anyone. Did he? He never dropped the pellets of poison into, into the machine that then gassed the Jews. George Bush didn’t fly any of the airplanes that incinerated children. But will somebody, is it just a quantitative difference? Is there a qualitative difference here between George and any mass killer? If there is, I, I don’t see it. […]

The merits and failings of George W. Bush’s presidency is, without question, a topic worthy of genuine debate and controversy. There are legions of reasonable people who genuinely feel that blame for thousands of Iraqi civilian deaths lay at the feet at President Bush, due to an unwarranted invasion or “preemptive war.”

However, Adolf Hitler spawned a genocide designed to eradicate an entire people from the planet. To equate Bush and Hitler, as Malloy does in the clip below, is beyond irresponsible—it is reprehensible. And just like when we said that protesters of health care reform who compared Obama to Hitler were beyond contempt, other individuals who use similar rhetorical exaggeration are just as deserving of our derision.