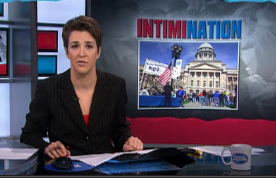 At what point does this all become very worrisome? In less than three weeks the 2nd Amendment March will take place Washington D.C. on April 19th to be exact, which also happens to land on the 15th anniversary of the Oklahoma City bombing. Terrible, thoughtless, possibly inciting, coincidence? Maybe.

April 19th also happens to be the day Patriots’ Day falls on this year (third Monday in April) and according to the March’s website that is the motivation for the date choice. Meanwhile, the group is currently organizing marches across the country as a lead up to the big day.

As Rachel Maddow pointed out on her show last night, April 19 did not have significance with Timothy McVeigh because it landed on Patriots’ Day (it didn’t that year), he picked it because it was the anniversary of the David Koresh, Branch Davidion fire at Waco and, according to Maddow, that “convinced him he need to wage violent war on the United States.” So yeah, a loaded date, and absolutely no pun intended.

Maddow was quick to clarify the 2nd Amendment March was not the one she had been talking about earlier this week, which is the Restore the Constitution Open Carry Rally that features this guy as a headline speaker and is technically taking place in Virginia. Meaning, among other things, that there are two anti-government, pro-gun rallies in the Captiol on the same, loaded, day. Says Maddow: “There is a certain disconnect between what these organizers describe at their peaceful motives and the tactics they are using to attract try to attract their audience.” Video below.