Psychology Today Asks (Then Un-Asks) ‘Why Are Black Women Less Physically Attractive Than Other Women?’ 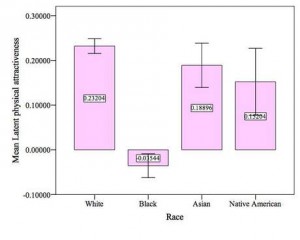 A column on the Psychology Today website earlier today caused a justified wave of Freud rage™ by asking “Why Are Black Women Less Physically Attractive Than Other Women?”

The post, which featured “research” of uncertain methodology by evolutionary psychologist (“How did that make protozoa feel?”) Satoshi Kanazawa, drew immediate condemnation, and the magazine has since deleted the article. A reprint of the article is still up at Something Awful.

Kanazawa is no stranger to controversy, having previously recommended an Ann Coulter presidency to wipe out the Middle East with nuclear weapons (really), but his latest work really takes the (presumably not chocolate) cake. Kanazawa extrapolates from a data set created by the unrelated Add Health project, which tracked survey responses from adolescence to adulthood on a wide variety of subjects. From these survey responses, Kanazawa concludes that “black women are objectively less physically attractive than other women.”

This is based on the ridiculously flawed assumption that the opinion of an outsider is necessarily “objective,” while one’s own opinion is “subjective.”

Yes, that must be it. It’s not the fact that Caucasians have controlled cultural norms of beauty in America since…always (for more on this, check out the provocative, and thought-provoking, Chris Rock documentary Good Hair). No, it’s definitely the testosterone.

Adding insult to injury, he also notes that these testosterone-jacked uggos are stuck up, to boot:

This result is remarkable, especially given the internal cultural perception of black men choosing white women once they have achieved material success. Given the devastating effects of body-image issues on our young women, you would think people would be trying to bottle this kind of self-esteem and spread it, not crush it with junk science.

Personally, I concur with my learned colleague, Dr. Mix-a-lot, and more broadly, with the notion that beauty is in the eye of the beholder. When the majority of those eyes are accustomed to one set of norms, it is unreasonable to assume that their conclusions can be called “objective.” In making that assumption, Kanazawa has made a (thick and juicy) ass of himself.

Psychology Today confirmed to The Root that they had, indeed, deliberately deleted the post (and that the intense traffic generated by it had briefly crashed the site), but they have not responded to our requests for further comment. They would probably ask us to look at this blot on their record and tell them what we see.