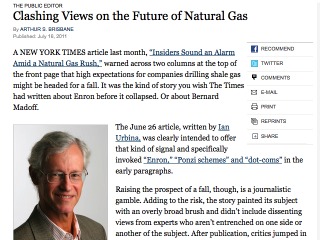 Earlier this month, we brought your attention to a piece by RealClearPolitics’ Jon Entine that looked into a report on shale that appeared in the New York Times. The NYT article included several quotes from anonymous sources and some from individuals whose backgrounds and full relationships to / histories with the shale industry were not made clear.

Now, the New York Times‘ public editor, Arthur S. Brisbane, has admitted his paper could have done a better job at presenting that information in a more transparent, fairer manner. In a piece titled “Clashing Views on the Future of Natural Gas,” Brisbane says he asked the original article’s author, Ian Urbina, and Urbina’s editors to address readers’ complaints that the article had neglected, among other things, to mention that the shale industry was booming:

I also asked why The Times didn’t include input from the energy giants, like Exxon Mobil, that have invested billions in natural gas recently. If shale gas is a Ponzi scheme, I wondered, why would the nation’s energy leader jump in?

Mr. Urbina and Adam Bryant, a deputy national editor, said the focus was not on the major companies but on the “independents” that focus on shale gas, because these firms have been the most vocal boosters of shale gas, have benefited most from federal rules changes regarding reserves and are most vulnerable to sharp financial swings. The independents, in industry parlance, are a diverse group that are smaller than major companies like Exxon Mobil and don’t operate major-brand gas stations.

This was lost on many readers, including me.

Brisbane also agreed with readers (and with RealClearPolitics) in realizing that “such a pointed article needed more convincing substantiation, more space for a reasoned explanation of the other side and more clarity about its focus:”

No question, the article challenged conventional thinking, and perhaps some of the shale gas independents will eventually founder. But the article went out on a limb, lacked an in-depth dissenting view in the text and should have made clear that shale gas had boomed.