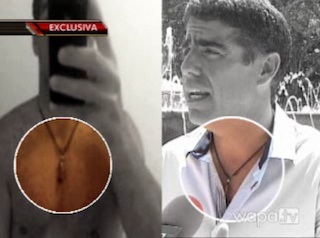 Well, it looks like we have a new Anthony Weiner in town. A Puerto Rican TV show called Dando Candela presented Republican Senator Roberto Arango with naked pictures found on the Internet that they claimed were of him. He wouldn’t deny the allegations, saying he had taken photos like that but only to document his weight loss. Of course, that doesn’t explain the fact that the pictures were found on Grindr, a hook up site for gay and bisexual men.

Yes, even though the name “Arango” isn’t a euphemism for a male organ (I mean, it could be. My Spanish is rusty), it looks like this story might end up being just as interesting as Weiner’s.

Here’s Arango’s explanation for why he can’t deny the pictures are of him (translation from Guanabee.com):

“You know I’ve been losing weight. As I shed that weight, I’ve been taking pictures. I don’t remember taking this particular picture but I’m not gonna say I didn’t take it. I’d tell you if I remembered taking the picture but I don’t.”

UPDATE 8/29: Naked hook up pictures have claimed another congressional victim. Arango has resigned from office.

Here’s a video report from WAPA. It’s in Spanish but, fortunately, naked Congressmen are a universal language.