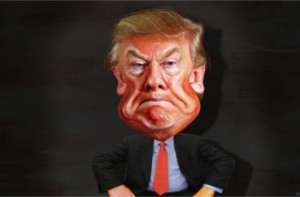 Trump entered the last two months of the presidential campaign with one hell of an advantage: He has set expectations for his behavior and conduct so miserably low that anything short of a nuclear Twitter tantrum and he’s elevated to the ranks of our nation’s most dignified statesmen.

So it was in the days following Clinton’s announced pneumonia diagnosis when pundits praised him for having the diplomatic tact not to mock her, gloat about her illness (as Trump’s stalwart booster and primary source of news Alex Jones did), and or amplify a conspiracy theory about her secret prion disease.

Fox contributor Guy Benson, sitting in on Outnumbered Wednesday as the show’s Hashtag One Lucky Guy, applauded the “remarkable show of discipline and restraint” from Trump for refusing to take the bait when Fox host and Trump toady Sean Hannity tried to get the candidate to talk about it.

Former RNC comms director Doug Heye, writing in Wall Street Journal, lauded Trump’s remarkable restraint, which, in Heyes’ estimation came down mainly to his ability to stop short of lashing out against Clinton for having pneumonia or broadcasting conspiracy theories about her health. “That said, Mr. Trump is and will always be graded on a curve,” he qualified.

And what a curve. Trump once kicked off a debate by singing the praises of his 70-year-old dong. He built a primary campaign strategy that relied heavily on name calling, conspiracy mongering, and insulting his opponents’ wives. Trump has set the bar so low that he can credibly claim a victory at the first debate no matter what he does — as long as it doesn’t involve pantsing Lester Holt.

And if he can just resist the urge to retweet another neo-Nazi between now and November, then, who knows, maybe he’ll be the second POTUS in a row to win a Nobel Peace Prize for doing nothing at all.