Put That Coffee Down: David Mamet Drinks The NRA Kool-Aid

Put That Coffee Down: David Mamet Drinks The NRA Kool-Aid 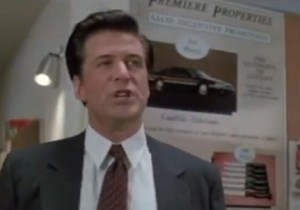 The gun-extremist corner of the right has been steadily cranking out a stream of twisted logic, tired arguments, and lies in order to stem the tide of overwhelming public support for sensible gun regulations, but on Friday, they got  hand from a surprising source: playwright David Mamet, whose Newsweek/Daily Beast essay on gun control is being touted as a Work Of Genius by conservatives desperate to have a smart person agree with them. What’s surprising about the piece is that one of the greatest living writers can only manage a sub-WorldNetDaily mashup of Tea Party tropes and tired gun-nut propaganda.

As a longtime fan of Mamet’s film work, I was disappointed to find out that he succumbed to the Dark Side of conservative self-interest a few years back, but them’s the breaks. Charlton Heston was a conservative gun nut my whole life, and that never prevented me from enjoying Planet of the Apes, or Soylent Green, so I will also continue to stop what I’m doing and watch Heist each and every time it’s on. If the price of Mamet’s art is the occasional poorly-reasoned, disinformed gun control rant, then I will pay my fare by setting the record straight.

The first two acts of Mamet’s screed are devoted to what is essentially a collection of thesaurus-enhanced Tea Party signs, calling President Obama a communist, and all government (as we understand it) evil, with a sprinkling of insights like “The government, for example, has determined that black people (somehow) have fewer abilities than white people, and, so, must be given certain preferences,” and that progressive taxation (I think) “has a name, and that name is ‘slavery.’”

It’s painful stuff to read for anyone with an appreciation for Mamet’s skill, but thinking about it now, the strength of Glengarry Glen Ross, for example, never really relied on any of it making particular sense. The gun stuff doesn’t make much more sense, either, but since it carries the additional drawback of being harmful and misinformed, it begs rebuttal. By all means, continue to love David Mamet, just don’t believe him.

“Many are opposed to private ownership of firearms,” Mamet says, and while that may be technically true (15 or 20 people are “many” more than a single David Mamet), the current debate over gun regulation does not involve opposition to private ownership of firearms, and public opinion polling belies his assertion. No one is even asking about support for banning all firearm ownership, but even on the narrow question of banning all handguns, only about a quarter of the people say they support that.

It’s a straw man that Mamet proceeds to knock down with a stat that deep-dish gun nuts cite, but which gets no play at the grown-ups’  table. “there are more than 2 million instances a year of the armed citizen deterring or stopping armed criminals; a number four times that of all crimes involving firearms.”

That statistic is extrapolated from a single 1993 poll that didn’t even ask if the respondents had stopped or deterred an armed criminal, but rather, whether they had “used a handgun, even if it was not fired, for self-protection or for the protection of property at home, work, or elsewhere?”

Other studies have placed the number of such encounters in the hundred-thousand range, and determined that they include incidents like these:

• A 62 year old male said that at 6 pm “the police called. My alarm at my business went off so I went there to shut it off. Two men were outside my building, so from my car I shot at the ground near them”. The respondent said the men were trespassing.

• A 58 year old male was inside his home at 2 pm. “I was watching a movie and [an acquaintance] interrupted me. I yelled that I was going to shoot him and he ran to his car”. The respondent said his acquaintance was committing a verbal assault. The respondent’s gun, a .44 Magnum, was located “in my holster on me”.

That Harvard study determined that over half of reported firearm self-defense uses were “probably illegal,” so if you want to juice the defensive gun stats, just hang out all day menacing jaywalkers with your Glock.

None of this is relevant to the current discussion of sensible gun regulation, however, because none of the proposals outlined by President Obama restrict the use of firearms for self-defense. In fact, the newly-introduced assault weapons ban specifically protects, by name, 2,200 types of hunting and sporting firearms. That Mamet quotes such a statistic is, however, tells you everything you need to know about the rest of his rant, which is a string of the most tired gun-nut cliches:

“Violence by firearms is most prevalent in big cities with the strictest gun laws.”

Aside from the socioeconomic factors it ignores, this talking point just proves the need for for federal gun regulation. Guns can purchased legally at gun shows with no background check, for example, and be resold in cities like Chicago. Restricting access to guns with local laws is like trying to ban water from the middle of a bathtub. At the state level, stronger gun regulations are clearly correlated with lower rates of gun deaths.

“(President Obama) has just passed a bill that extends to him and his family protection, around the clock and for life, by the Secret Service. He, evidently, feels that he is best qualified to determine his needs, and, of course, he is.”

Really, Mr. Mamet? You’re drawing inspiration from the stupidest NRA ad ever? That is sad, but again, just for the record, the President simply reinstated a law that was changed in 1997, and which also extends protection to the family of former President George W. Bush, and there are no laws on the President’s agenda preventing anyone from hiring armed guards, or carrying guns for self-defense.

“Q. Who ‘needs’ an assault rifle? A. No one outside the military and the police. I concur.”

Good! Then what are we arguing about?

Oh, I see, Mamet is falsely conflating the terms “assault weapon”  and “assault rifle,” the latter of which refers to military rifles capable of fully-automatic fire. He notes that fully automatic weapons are already illegal, and exceedingly rare. Trapped by the inescapable conclusion that it is possible to keep certain weapons out of criminals’ hands through effective gun regulation, Mamet makes this absurd logical transaction: “But criminals, let us reflect, by definition, are those who will not abide by the laws. What purpose will passing more laws serve?”

It’s a line that gun nuts use all the time, but not in such a self-satirical form: Since criminals ignore laws, why have laws? Thank God Mamet didn’t become a doctor, or we’d never have a new medicine.

“We need more armed citizens in the schools.”

President Obama agrees, but like most Americans, he just wants them to be trained police officers, not teachers and security guards with “a few hours of training.” As Mamet points out, our children are far more precious than the contents of some jewelry store, but also far more in need of vigilance, so why would we want to protect them as though they were baubles at a pawn shop? And why would Mamet support a guy who vigorously opposed funding for more cops?

“Yes, but we should check all applicants for firearms for a criminal record? …How are they checked? Are they checked? By what agency, with what monies? The country is broke. Do we actually want another agency staffed by bureaucrats for whom there is no funding?”

So, we can afford to put an armed guard in every school, but we can’t afford to improve the federal background check system, which is some form of wizardry, anyway.

“The so-called assault weapons ban is a hoax. It is a political appeal to the ignorant. The guns it supposedly banned have been illegal (as above) for 78 years. Did the ban make them ‘more’ illegal? The ban addresses only the appearance of weapons, not their operation.”

Aside from Mamet’s false (even ignorant) conflation of machine guns with semi-automatic assault weapons, the notion that assault weapons are defined by “cosmetic” features is the most willful lie in the current debate over firearms regulations. The fact is that there are clear functional parameters for defining an assault weapon, parameters which only fluctuate according to the gun lobby’s ability to weaken or circumvent them.

“The individual is not only best qualified to provide his own personal defense, he is the only one qualified to do so: and his right to do so is guaranteed by the Constitution.”

Again, this is only relevant to the current debate in that President Obama, and almost everyone else, agrees that the Constitution guarantees the right to bear arms for individual self-defense, and the Supreme Court has determined that the Constitution allows the government to regulate assault weapons.

By all means, continue to enjoy David Mamet’s work, which makes the terrible acting in House Of Games barely noticeable, but don’t judge him by this essay, and whatever you do, don’t believe it. As a gun policy expert, Mamet doesn’t even in a set of steak knives.