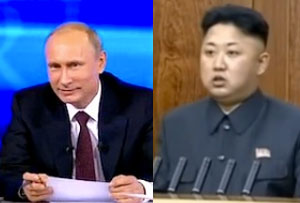 This week, North Korea was accused of hacking Sony’s computers in a devastating cyberattack, and American-Russian relations are growing uneasy as the value of the ruble falls. So naturally, today is the best day for Russia to announce that Kim Jong-Un will visit Vladimir Putin next year.

Russian officials confirmed that the dictator will be Putin’s guest during Moscow’s celebration of the 70th anniversary of the end of World War II. According to the Washington Post, this will be Kim’s first foreign visit since he assumed power in 2011.

At this point, we really shouldn’t have to remind you why Putin and Kim hate America with the burning passion of a thousand nuclear bombs, but to quickly remind you why they don’t like us right now:

And now they’re going to hang out, eat popcorn, sing “Shake It Off,” and hate America together.