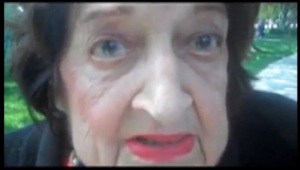 Rabbi David Nesenoff gained national name recognition when a general question on Israel got White House Press Corps legend Helen Thomas to demand that the Jewish population of Israel “go back to Poland.” In this weekend’s Washington Post, Rabbi Nesenoff reflects on those comments and their contribution to the mideast peace dialogue, and the best word to sum up his take on the matter is “oooh.”

It’s the first time the Rabbi responds at length to the comments, after letting his video speak for itself and having a mini-YouTube scandal of his own, and he is still incensed about the matter, despite the news cycle leaving the story behind in the past few weeks. The aforementioned “oooh” is his reaction to the comments caught on his video, when Thomas tells him that the Jewish population of Israel should “go back to Poland, Germany.” It was, he says, his only reaction. “Well, I was thinking ‘oooh,'” he explains, while listening to her comments, “Oooh. Most heard it the first time. Certainly during the multitude of reruns, “oooh” became part of the song. It was a response by a rabbi to Thomas’s comments, and it was from my soul.” He explains that the biggest concern he had with the comments were that they were not directed towards any policy in particular, but to the whole of his people:

“She didn’t say that the blockade was unjust, or that aid was not getting to Gaza, or that there was a massacre on the high seas, or that East Jerusalem is occupied, or that the settlements are immoral . . . and get out and go back to West Jerusalem, Tel Aviv, Haifa and Eilat. No. This was not the two-state solution. This was get the hell out and go back to the places of the final solution, Poland and Germany. The Jew has no connection with the land of Israel.”

And, worse than that, he argues, Thomas didn’t have a very good argument to back up her stance, other than “I’m from Arab descent.” “That’s all you got?” he asks incredulously. He attributes her comments to “ingrown, organic hate” that has no real place in public dialogue.

It’s a fairly level-headed and well-argued piece on the whole, especially given the heated subject matter, though the timing– deep in the middle of the Gulf oil disaster that refused to budge from the top headlines, will probably give it less circulation than it merits, especially since the man that is said to have brought down Helen Thomas (though, really, she brought herself down) should have probably been the first to speak up, not the last.