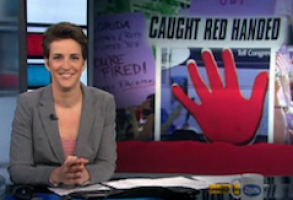 The Tea Party Tax Day protests yesterday got wall-to-wall coverage yesterday on the different news channels, from Fox News’ heroic depiction over to MSNBC where Rachel Maddow seemed even smirkier that usual. Maddow looked into the major corporations like Exxon and Phillip Morris that have ties to the Tea Party and yesterday’s protests in a segment called “Caught Red Handed” (we see what you did there, Ms. Maddow).

While big businesses funneling their money into different political groups either conservative, progressive, or the Whig Party is nothing new, the story gets interesting when it deals with Koch Industries who sent an e-mail to Talking Points Memo claiming they had nothing to do with the Tea Party. The weird thing is, no one had said they did. To quote a stuffy old playwright, it seems Koch doth protest too much. Video below.

How weird is that? If Koch wants to fund the Tea Partiers, that’s one thing, but what’s with the random e-mail? Didn’t they know that anyone who read it would instantly start investigating their claim? And as Maddow shows, it’s just a quick Google search to prove they’re lying. Just read what they wrote, it’s about as suspicious as you can get.

We certainly hope that whoever wrote that e-mail never commits a crime any time soon because they are terrible at covering it up. We can see it now: they would randomly wander into a police station saying, “Guys, just so you know, I totes didn’t kill a prostitute last night.”

You can read the full story of the e-mail over at TPM.