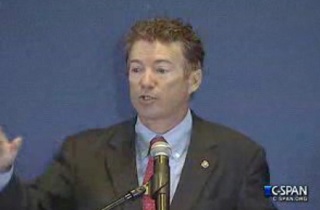 Senator Rand Paul‘s (R-KY) Wednesday speech to students at historically black Howard University in Washington, part of the Republican Party’s outreach effort, has been getting brutal reviews all day, mainly for his condescending retelling of the party’s pre-Southern Strategy history and whitewashing of his own controversial remarks on the Civil Rights Act. The centerpiece of Paul’s outreach fail, however, was his long buildup to a promised diagnosis of how the Republican Party lost the black vote, culminating in a historically inaccurate explanation that blamed the exodus of black voters on…black voters.

You know your minority outreach is off to a bad start when you have to say “I have never wavered in my support for civil rights or the civil rights act,” and have it not even be true, by your own seconds-later admission: “The dispute, if there is one, has always been about how much of the remedy should come under federal or state or private purview.”

Yeah, that’s what the Federal Civil Rights Act was all about. It’s like not having a problem with murder laws, but just some disagreement about the degree to which you’re allowed to kill someone for fun. In the next breath, Paul said that “What gets lost is that the Republican Party has always been the party of civil rights and voting rights.”

Yes, it got lost in the stuff they’ve done for fifty years, including last year.

But I will leave it to others to nitpick Rand Paul’s speech. The real star was his engagement in the fun-at-CPAC pastime of reminiscing about all of the great things Republicans did before 1964, and the concurrently crummy things Democrats did back then, but with the manner of a first-grade teacher explaining the alphabet. Believe it or not, Rand, lots of people already know about the shift that occurred in 1964.

long the way, though, he offered the tantalizing prospect that he might be willing to address that shift, and acknowledge at least some of his party’s role in alienating black voters. “How did the Republican Party, the party of the great Emancipator, lose the trust and faith of an entire race?” Paul asked. “From the Civil War to the Civil Rights Movement, for a century, most black Americans voted Republican. How did we lose that vote?”

He then continued to tick off a sepia-toned list of Republican non-horribleness from the pre-Civil Rights era, building up to the big question: “You may say, ‘Oh that’s all well and good, but that was a long time ago. What have you done for me lately?'”

This is it! This is where he talks about the mass exodus of Dixiecrats to the GOP because of the Civil Rights Act, and the party’s decision to pursue a race-based strategy centered around that exodus! Let the healing begin!

Set aside the historical inaccuracy of Paul’s analysis. Actually, don’t set it aside. Black party identification remained about even through all of FDR’s terms as president, after which it began to fall off considerably, but can you detect the point at which the Republicans lost the black vote by looking at the chart on page nine?

That’s fine, though, if Rand Paul wants to stay in denial about when Republicans lost black voters, and even about why, he could at least think up some historically inaccurate reason that doesn’t just blame black people for being too “impatient for economic emancipation,” and too susceptible to the appeal of “unlimited federal assistance,” because to the untrained ear, it sounds like he’s saying the greedy black folks were bought off with welfare. That sounds kinda familiar, and is the kind of thing that this “outreach” is supposed to fix.