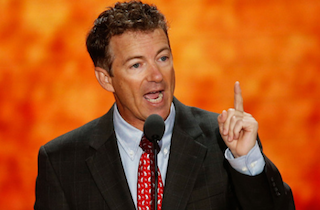 The uproar continues over the recent reports about the NSA’s collecting phone records and, through a program named PRISM, tapping into servers nine of the largest American Internet companies. Sen. Rand Paul (R-KY) was among those high critical of President Obama (who addressed the matter today). Nobody is above the law, he argued — and that includes the president.

As critics have been quick to point out, Senator Obama and Candidate Obama had spoken about not undermining civil liberties and constitutional protections while aiming to better intelligence gathering and security efforts. In a Guardian op-ed, Paul specifically cited Obama’s 2007 opposition to the Foreign Intelligence Surveillance Act (FISA), seeking to contrast it with his actions in the White House.

“Senator Obama was right,” Paul asserted. “Had I been in the Senate, I would’ve voted with him.”

In the balancing act between security and liberty, the senator noted that “American tradition has long been to err on the side of liberty.” But what we’re seeing now? An “all-out assault on the constitution.”

Paul tied it in with the other controversies currently facing the administration:

Under this administration, the Internal Revenue Service (IRS) has targeted political dissidents, the Department of Justice has seized reporters’ phone records, and now we’ve learned the NSA seized an unlimited amount of Verizon’s client data. Just when you think it can’t get any worse under this president, it does. This is an all-out assault on the constitution. These actions are unacceptable under any president, Democrat or Republican.

“If the seizure and surveillance of Americans’ phone records…is now considered a legitimate security precaution,” Paul charged, “there is literally no protection of any kind guaranteed anymore to American citizens.”

Indeed, the “administration continues to treat the US constitution as a dead letter.”

Further emphasizing his contrast, he used Obama’s own words — his 2008 remark: “We must reaffirm that no one in this country is above the law” — against him. Yes, Paul agreed. That applies to the president as well.