Rand Paul to Hannity: Blame Maliki, Not Obama for Crisis in Iraq
AUDIO

Rand Paul to Hannity: Blame Maliki, Not Obama for Crisis in Iraq 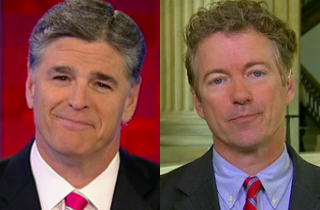 Last weekend, Sen. Rand Paul (R-KY) broke with the vast majority of his party by telling Meet The Press host David Gregory, “I don’t blame on President Obama” for the current crisis in Iraq. This week, he brought that message to a more conservative audience by saying the same on Sean Hannity’s radio show.

Hannity began by grilling Paul on what he meant when he said he doesn’t “blame” Obama for the rise of ISIS, arguing that if the U.S. had “stood our ground” in Iraq rather than removing our troops, the situation would look very different today. “By leaving the Iraqis hanging like President Obama did, it opened the door where all of these groups could reorganize with any ramifications,” he said.

Paul replied by telling Hannity that one of the reasons ISIS has become stronger is that the U.S. “allied with them in Syria” against the Bashar al-Assad regime. But then he cautioned Hannity against solely blaming Obama for what is happening in the Middle East.

“We shouldn’t always say that it is just our fault, or any one person’s fault over here,” Paul said, calling Iraqi President Nouri al-Maliki “the person most culpable” for the crisis after he kicked the Sunnis out of his army. “Really Maliki deserves a lot of blame,” he added.

Without giving Maliki a pass, Hannity quickly returned to listing off the reasons why President Obama is to blame for “pulling out early” and leaving Iraq a mess. “That’s Obama’s fault, that’s not Dick Cheney’s fault,” he said.

“Could we have stopped this outbreak of ISIS?” Paul asked. “Yeah, but how many troops would it have required? 50-, 100,000?” If the Shi’ites in Iraq are not willing to fight to keep the city of Mosul, then Paul said he’s not willing to send his son there to do it for them.