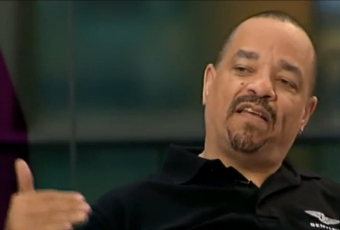 In light of Friday morning’s Aurora, Colo., movie theater shooting that left 12 people dead and dozens more injured, the issue of gun control has come roaring back into the public’s mind. From NYC Mayor Michael Bloomberg to Senator Frank Lautenberg (D-NJ) to pretty much every left-leaning personality on MSNBC, many people reacted in a predictably knee-jerk fashion and blamed lax gun control laws (in addition to violent video games or a “culture of violence“) for the actions of a person who was clearly hell-bent on murdering.

Others have come out in defense of gun rights, many cautioning that we shouldn’t be so quick to blame lax legislation for a crime for which we’ve yet to discover a motive. Interestingly, one of the more succinct explanations for why the connection between gun laws and this particular massacre might be tenuous came from… rap legend and actor Ice-T.

Speaking with Channel 4 London’s Krishnan Guru-Murthy in the hours after the Colorado news broke, the self-described “Godfather of Gangsta Rap” vehemently denied a connection between gun rights and the Aurora murders.

“It’s legal in the United States,” the rapper said. “The right to bear arms is because that’s the last form of defense against tyranny. Not to hunt. It’s to protect yourself from the police.”

“And do you see any link between that and this sort of instance?” Guru-Murthy challenged.

“No. Not really,” Ice-T responded. “If somebody wants to kill people, they don’t need a gun to do it.”

“Makes it easier though, doesn’t it?” the host pushed back.

“Not really. You can strap explosives on your body. They do that all the time.”

Ice’s comments ring particularly true when you think of the unintended consequences of prohibitions of any kind. Strict laws aimed at ridding the streets of recreational drugs, adult prostitution, and gun possession are all well-intentioned, but they ignore the economics of prohibition: most law-abiding citizens are deterred by strict laws, but the people who put a higher premium on possessing those illicit goods will find a way around the law.

When someone is as hell-bent on massacring people at a movie theater as the Aurora gunman was, it is safe to assume they would have gone as far as needed to obtain the proper weapons for such a murderous toll. If not guns, perhaps explosives; if not explosives, perhaps other means of chaos.

Check out the clip below, via Channel 4 London: