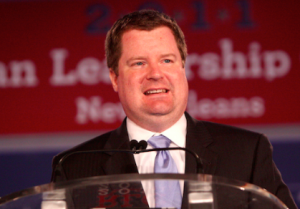 The “conservative media is failing to advance ideas and stories,” RedState editor Erick Erickson asserted on Wednesday. Noting that the echo in the chamber has gotten too loud, Erickson urged conservatives to step away from the outrage and focus instead on integrity in reporting.

“Conservatives are trying so hard to highlight controversies, no matter how trivial, we have forgotten the basics of reporting: W5 + H as I learned in grade school, also known as who, what, where, when, why, and how,” he wrote. “We need to establish a baseline for integrity in reporting that then allows us to highlight the truly outrageous.”

Erickson cited the “Obamaphone” story as an example, explaining that while some conservatives aim for basic facts, they end up getting stuck on talking points. They “seem to covet access to the Speaker, Senate Minority Leader, and Leadership,” reporting their side “without question and turn conservatives in Congress into the butt of jokes.”

But this does nothing except undercut their own agenda. There is no reason to be outraged without first having all the facts, he said — and furthermore, no use being outraged over everything.

“Conservatives must start telling stories, not just producing white papers and peddling daily outrage,” which means they must have a foundation of facts. With that he laid out RedState’s own mission: “educate conservative activists, motivate them to engage, and provide tools for easy activation and empowerment.”

“The echo in the chamber has gotten so loud…It translates only as anger and noise, neither of which are conducive to the art of persuasion.”

Erickson previously made a similar argument, calling out conservatives for becoming “outrage pimps” and “professional victims.” It’s ineffective to be the humorless, angry opposition, he contended.