The internet lit up yesterday with big news: Actress Renée Zellweger looks… different. The Oscar-winning star of Jerry Maguire, Bridget Jones’ Diary and Cold Mountain walked the red carpet at the Elle Women in Hollywood Awards Monday night and started trending heavily on Twitter and Facebook when images of her apparent transformation made their way around the web.

Here’s a side-by-side comparison below, via TMZ: 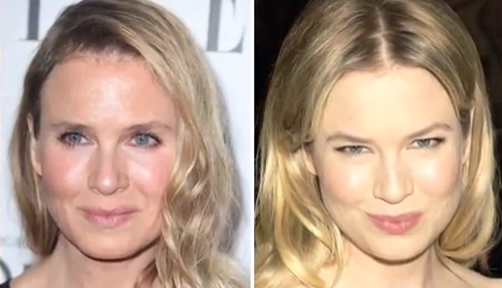 The interest in Zellweger’s new look was so intense that the actress decided to talk to People magazine about it on Wednesday.

“I’m glad folks think I look different! I’m living a different, happy, more fulfilling life, and I’m thrilled that perhaps it shows,” Zellweger said in an attempt to deflect rumors of plastic surgery gone wrong. “My friends say that I look peaceful. I am healthy. For a long time I wasn’t doing such a good job with that. I took on a schedule that is not realistically sustainable and didn’t allow for taking care of myself. Rather than stopping to recalibrate, I kept running until I was depleted and made bad choices about how to conceal the exhaustion. I was aware of the chaos and finally chose different things.”

Zellweger hasn’t headlined a major movie since the 2009 horror film Case 39. She is scheduled to appear in The Whole Truth, a legal thrilled set in Boston slated for 2015, alongside Keanu Reeves.