Weiner vs. Clinton | Comparing The Scandals 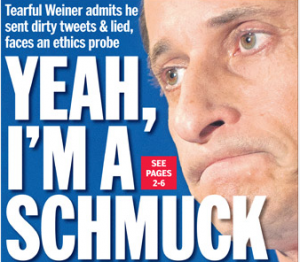 Now that the dust of Weinergate is starting to settle, we can start the preliminary analyses that historians will be using centuries from now, and upon which college students will be writing their theses until the end of time.

Well, that might be a bit of an overstatement (can you imagine that thesis? “And thus, according to all the information, the Congressman did tweet a picture of his erect… “ Yeah, I can’t quite see it either), but we can at least stop our speculating, and get down to looking at the, ahem, ramifications of Weinergate and make some comparisons to previous scandals. One that comes to mind, especially due to the close relationship the two share, is between Rep. Weiner and former president Bill Clinton.

Although the scandals were exposed in different ways, both had been going on behind the scenes for quite some time, and were presented to the public by third parties who distinctly did not have the best interests of the politicians at heart. The most interesting thing to look at in the “denial” phase of both scandals is the language that was used. Hillary Clinton famously went on the TODAY Show and asked people to investigate the “vast right-wing conspiracy” against her husband. Weiner’s allegations of a “hack” or “prank” were not as powerfully worded, but were still similar.

In some ways, this notion of assigning the blame to others was fair; information about both men was retrieved without their consent, by people who were tangentially involved in the scandal. Andrew Breitbart has filled the same role in the Weiner scandal that the Drudge Report took on in the Clinton scandal. On the other hand, lying was obviously one of the principal, if not the principal issue, in both of these scandals. Pointing fingers absolutely made things worse for both men. No one really cares that their privacy was invaded: that’s the problem with being a public figure.

Regarding their denials, both men were quick to jump on the “I’m a very busy and important politician” bandwagon. Clinton’s famous “I did not have sexual relations with that woman” speech began with “I have to go back to work on my State of the Union speech” while Weiner was quick to tell MSNBC’s Luke Russert, “the things I do want to work on in Congress are being interrupted by this.” Both men used their power and positions to make themselves seem more legitimate, and infer that by questioning them, the media was making it impossible for America to keep running smoothly.

The ways both men finally owned up to their scandals were also similar. They took “complete responsibility” (Clinton’s words), and Weiner was even quick to note that his issues were not due to drugs or alcohol, but to personal failing, echoing Clinton’s words: “it constituted a critical lapse in judgment and a personal failure on my part for which I am solely and completely responsible”. Weiner though, was more openly emotional in his acceptance. He cried, he said “I’m deeply ashamed,” and “I regret not being honest about this.” Perhaps this was more modern of him. Or maybe Clinton felt the Presidential role called for stoicism.

Another interesting thing about both scandals is the role that sex played in both of them. There was no good old-fashioned sex in either “gate”. Some might say that this made the issues less hard-hitting. At the very least it allowed Clinton some gray area (and gave legions of post-millennial teenage boys more powerful persuasion techniques: “Bill Clinton doesn’t even think it’s sex!”), and Weiner even more so. Weiner was allowed to make the point that he had never physically cheated on his wife. But maybe this will open up another can of worms in the same way the Clinton scandal did. How seriously should we take sexting? Is it still cheating if it’s virtual? If you virtually cheat, do you get actual divorce papers?

The final, and most relevant, point to us at Mediaite is the factor the internet played in both scandals. The Drudge Report was instrumental in breaking news about the Clinton scandal, and it was one of the first times an internet-based news source revealed something so significant. But the story was perpetuated by more mainstream media outlets. Weinergate was perpetuated to an almost unprecedented degree by the Internet. When my mother sends me a link to a news story she has found on a strictly online-based publication, you have to know that times are changing.

This increasing reliance on the internet brings up some big questions. After the Clinton scandal, PBS’ Jim Lehrer and Terence Smith had a discussion about the Internet. Lehrer said “You know, some of the mainstream news organizations, the Dallas Morning News, being one, the Wall Street Journal being another, put stories on the internet before they put them in their own publications and had to say, wait a minute, that wasn’t right” and Smith responded that “it shows that the Internet has great potential for the fast delivery of news and great pitfalls too.”

That issue of the internet was at the heart of the Weiner scandal: the notion that it’s almost impossible to ever find the truth online. Stories are often published quickly: the depth of investigative journalism just cannot be the same on the Internet as it is in print. No one believed anything Weiner said until he stood at the podium and said, “I haven’t told the truth”. Will we ever be able to trust the Internet?

Either way, Clinton’s words at the end of his speech are powerful. “It is time to stop the pursuit of personal destruction and the prying into private lives and get on with our national life.”