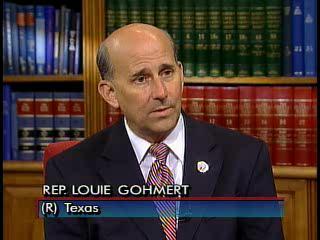 Following the Thursday night Aurora, Colorado movie theater shooting that has killed 12 people and left more than 30 injured, Rep. Louie Gohmert (R-TX) reportedly said that the tragedy was a result of “ongoing attacks on Judeo-Christian beliefs” and questioned why nobody else in the theater had a gun to take down the shooter in a state where concealed gun carry is allowed.

According to the Huffington Post‘s Jennifer Bendery, during his radio interview on the Heritage Foundation’s “Istook Live!” show with Ernest Istook, Rep. Gohmert was asked why he believes mass shootings like this one take place. The congressman responded that it’s a result of the weakening of Judeo-Christian values in America.

“Some of us happen to believe that when our founders talked about guarding our virtue and freedom, that that was important,” he reportedly said. “Whether it’s John Adams saying our Constitution was made only for moral and religious people […] Ben Franklin, only a virtuous people are capable of freedom, as nations become corrupt and vicious they have more need of masters. We have been at war with the very pillars, the very foundation of this country.”

– RELATED: GOP Congressman Shouts At Janet Napolitano, Insists ‘You See Me Hugging Muslims Around The World’

“You know what really gets me, as a Christian, is to see the ongoing attacks on Judeo-Christian beliefs, and then some senseless crazy act of a derelict takes place,” Rep. Gohmert lamented.

Istook then reportedly interrupted to clarify for the audience that the motivations of alleged Aurora gunman James Holmes remains unknown. Rep. Gohmert conceded that fact but reportedly went on to suggest the shootings were “a terrorist act” that could have been avoided if the country hadn’t lost its faith in God.

“People say […] where was God in all of this?” the congressman said. “We’ve threatened high school graduation participations, if they use God’s name, they’re going to be jailed […] I mean that kind of stuff. Where was God? What have we done with God? We don’t want him around. I kind of like his protective hand being present.”

Rep. Gohmert also said the tragedy possibly could have been avoided if someone else in the movie theater had been carrying a gun and was able to take down the shooter. Colorado law allows for the concealed carry of a firearm. “It does make me wonder: With all those people in the theater, was there nobody that was carrying a gun that could have stopped this guy more quickly?” he asked.