Rep. Steve King: ‘We Can’t Restore Our Civilization With Somebody Else’s Babies’ 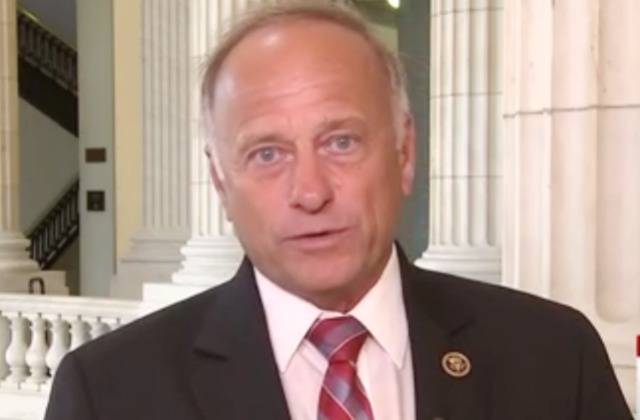 Congressman Steve King received immediate Twitter blowback for this message he sent out in response to a tweet saying Dutch politician Geert Wilders has been right in his fight against Islamists:

The “our civilization” versus “somebody else’s babies” rhetoric obviously alarmed a lot of people about what King was implying:

@SteveKingIA You, Congressman, are simply a bigot. Good thing is, I know a lot of smart Dems eyeing your seat.

Brah @SteveKingIA ‘your’ ‘civilization’ does not exist without somebody else’s babies. @V_of_Europe

I am grateful to have spent a lot of time in Iowa, Rep @SteveKingIA. I know there are many there who find your white nationalism abhorrent. https://t.co/ep6MW1ycdJ

The West is either a set of values or a race. I think we know where Steve stands. https://t.co/3MamQPkZWM

Steve King needs to resign, go away, remove himself from any role in directing the future of our country. https://t.co/AfWxsFuoFX

@SteveKingIA You know that you were “somebody else’s baby” too, right? Or do you not understand how this works?

Last year King got media attention for talking about the contributions of white people and asking, “Where did any other sub-group of people contribute more to civilization?” He defended those remarks by later arguing, “The idea of multiculturalism, that every culture is equal — that’s not objectively true.”

Correction: King’s quote was “Where did any other sub-group of people contribute more to civilization?” The initial version of this post did not include “more” in the quote.