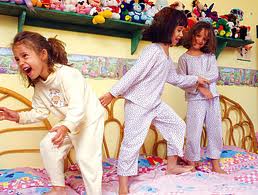 After a midterm election where it seemed like all it took was slides from a third grade field trip to town hall would be all it took to brand a candidate as a “Washington insider,” Congress freshmen are showing just how seriously they take wasteful spending by sleeping on their couches. The Wall Street Journal has an interesting article claiming that 15% of the incoming members of Congress will be living in their offices instead of getting actual DC residences. These sleepovers will presumably help them save money as well as get to work on important legislature deciding who is the hottest Jonas Brother.

From the Wall Street Journal:

“With voters again shunning Washington and fiscal excess, a number of incoming House members plan to demonstrate their scorn for both by camping out near their new desks. Many more are still undecided but may well join the sleep-sofa caucus.

‘Since I’m here on a temporary basis, I don’t see any need to have a permanent kind of residence,’ says Rep.-elect Joe Heck, a Nevada Republican, who was thinking roll-out cot when he looked at office space this month.

Earlier this month, freshman lawmakers drew lots and chose the three-room suites they and their aides will inhabit in one of three House office buildings.

Rep.-elect Tim Griffin, an Army reservist, stood near the gym in the Rayburn House Office Building and used some compass software on his phone to navigate the paths to potential offices.

‘We want to get as close to Rayburn as possible,’ Mr. Griffin, an Arkansas Republican, told an aide. ‘I’ve got to walk all the way down this hall in the morning.'”

That’s the way to make a message! Do those quotes sound like they’re coming from some kind of insidery, beltway, fat cat types? Absolutely not! They sound like they’re coming from down home public servants…who may or may not be entering their first year of college. Clearly the Congressional semester will begin with the RAs organizing trust exorcises and all the freshmen trying to get the right girl-guy ratio to get into the sweetest frat parties.

Another interesting tidbit from the article is the fact that this influx of couch-sleepers has happened before in 1994. Apparently, it typically comes after an election in which Republicans make large gains. Well, we all know what that means. Clearly there’s a huge difference between the Republicans in Washington and the Democrats in Washington.

The Republicans are going to have much worse back problems.