Report: Melania Trump Was Paid for Modeling Jobs in U.S. Before Getting Work Visa

Report: Melania Trump Was Paid for Modeling Jobs in U.S. Before Getting Work Visa 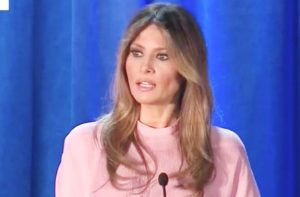 There were some reports a few months ago about Melania Trump‘s work status. Nude photos that came out in August raised questions about when she came to the U.S. and a possible inconsistency in her background.

She said in response to that report, “Let me set the record straight. I have at all times been in full compliance with the immigration laws of this country.”

But there’s a new AP report out tonight that says she was paid for 10 separate modeling jobs in the U.S. weeks before she obtained her work visa.

The documents obtained by the AP show she was paid for 10 modeling assignments between Sept. 10 and Oct. 15, during a time when her visa allowed her generally to be in the U.S. and look for work but not perform paid work in the country. The documents examined by the AP indicate that the modeling assignments would have been outside the bounds of her visa…

During that seven-week period, the ledgers list modeling work for clients that included Fitness magazine and Bergdorf Goodman department store. The management agreement, which said it was not an employment agreement, included a handwritten date of Aug. 27, 1996. The top of the document said it was “made and entered into as of this 4th day of September 1996.”

Former modeling agent Paolo Zampolli was asked about the documents the AP found. He had this to say:

Asked about the two dates on the document, Zampolli said he usually vacationed in Europe each August and likely arranged for the contract to be formally executed when he returned to New York after Labor Day, even though Mrs. Trump had signed it eight days earlier…

Zampolli said he did not recall Mrs. Trump working without legal permission. “Honestly, I don’t know. It’s like 20 years ago,” he said. “The contract looks (like) a real one and the standard one.”