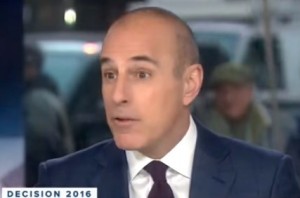 Matt Lauer has received a ton of criticism from fans and critics alike over his performance during Wednesday night’s Commander-In-Chief candidate forum. Now, one report says that his bosses concur with the consensus that Matt was #Laueringthebar.

CNN’s Brian Stelter is reporting that several high-ranking sources at NBC News “said they hear the criticism and agree with at least some of it.”

One executive, whom Stelter didn’t identify, was particularly blunt.

Lauer has been widely criticized for, among other things, not challenging a number of Donald Trump‘s statements, including his fully debunked claim that he opposed the Iraq War.

Basically universal condemnation from journalists for Lauer letting Trump get away with Iraq War comments: pic.twitter.com/S0O2BvepDr

Seriously — everyone, and I mean everyone, knew this would happen. And Matt Lauer didn't have a followup planned? https://t.co/mm5ufZKjEx

Matt Lauer was 10x tougher on Tom Cruise than he was on Donald Trump. Sad! #LaueringTheBar pic.twitter.com/MlURYXWtfi

Matt Lauer was tougher on Ryan Lochte than on Donald Trump https://t.co/p2HnfF9ALx pic.twitter.com/Q1f9wWz6sd

Lauer: What do you think of babies?
Trump: They're very soft.
Lauer: In 2006 you tweeted they AREN'T soft.
Trump: Yes they are.
Lauer: Okay.

Today we are all Ann Curry.

Edward Murrow is spinning in his grave. #LaueringTheBar

What a surprise that the person stumbling thru Olympics coverage cannot fairly host a presidential candidate forum. #LaueringTheBar

Someone forgot to tell @MLauer that he was interviewing candidates for POTUS, not Dancing with the Stars. #LaueringTheBar

Matt Lauer was terrible last night. He should stick to scrambling eggs on TV and leave the moderating to prepared journalists.

“This should be a black eye for Lack,” the executive said.