Report: Nobody Likes Sarah Palin Because She Is Disorganized!

Report: Nobody Likes Sarah Palin Because She Is Disorganized! 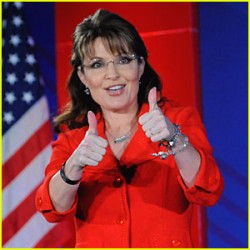 Some members of the Republican party reportedly have the long knives out for Sarah Palin. Jonathan Martin reports that certain GOP candidates are less than thrilled with Palin because…sometimes she is less than organized.

According to multiple Republican campaign sources, the former Alaska governor wreaks havoc on campaign logistics and planning…A recurring theme among the complaints is the problem of last-minute notice. In one instance, Palin had agreed to do a fundraising event for Kentucky Republican Senate candidate Rand Paul, but campaign officials had difficulty pinning her down for a specific date, and the amount of time she offered got smaller and smaller.

Unless “problem of last-minute notice” is code for she is not qualified to run this country I sort of fail to see why this is such a big deal. Couldn’t similar complaints be made about many people in a similar situation? Oh wait, apparently she also pissed off Glenn Beck:

And her multiple schedule changes so annoyed Glenn Beck that he finally decided not to have her on his radio or TV show to promote the book.

And then he had her headline his Restoring Honor rally so presumably he wasn’t that annoyed. To be clear, the point of this long article is that if Palin can’t organize herself now how can she run a Presidential campaign (short answer: she has no intention of doing so?): “Yet the problems that GOP campaigns have when booking her for events illustrate the challenges Palin will have in the event she runs for president. In part because of trust issues, she will not expand her circle and establish the sort of infrastructure necessary to coordinate basic matters such as surrogacy and travel.”

There are many, many, many things wrong with the idea of Sarah Palin running for president, but it’s hard to read a litany of complaints directed at her apparent inability to organize and not wonder if the same criticism would be lobbed at a male candidate. So she’s badly organized — this perhaps is not a surprise considering we are talking about a woman who essentially shifted her communications HQ to her Facebook page — is this really the worst thing about her? Either she’ll hire a better team or she will continue on her merry, 3rd party headline-making way until she announces she can do a better job for America by not running for President.