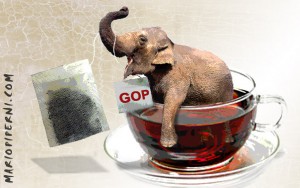 Flagging polls and a looming mid-term election have understandably caused alarm within leading Democratic political advisers. An article published in today’s NY Times reports that White House strategists are considering a campaign to “tie the G.O.P. to the Tea Party” in hopes of both energizing a democratic base of voters who fear some of the rhetoric coming from the Tea Party movement. While David Axelrod denies such an effort, there does appear to be some legs to this idea.

White House and Congressional Democratic strategists are trying to energize dispirited Democratic voters over the coming six weeks, in hopes of limiting the party’s losses and keeping control of the House and Senate. The strategists see openings to exploit after a string of Tea Party successes split Republicans in a number of states, culminating last week with developments that scrambled Senate races in Delaware and Alaska.

“We need to get out the message that it’s now really dangerous to re-empower the Republican Party,” said one Democratic strategist who has spoken with White House advisers but requested anonymity to discuss private strategy talks.

Democrats are divided. The party’s House and Senate campaign committees are resistant, not wanting to do anything that smacks of nationalizing the midterm elections when high unemployment and the drop in Mr. Obama’s popularity have made the climate so hostile to Democrats. Endangered Congressional candidates want any available money to go to their localized campaigns.

The article continues to suggest that President Obama will be taking a more visible part in the Fall campaigning season, opposed to the more limited role of fundraisers and small events. However, regardless of how often and where we see Obama, the White House is faced with a bit of a dilemma when it comes to the Tea Party movement. Ignoring and dismissing an angry and energized base has not weakened them, and painting them as unreasonable extremists is just as likely to backfire as well.

Perhaps Obama should take a page from the last Democratic president and participate in a summit in much the same way that Bill Clinton sat down with Newt Gingrich and his “Contract With America.” The only problem is, with whom should Obama sit down?

Update – Politico is reporting that White House officials claim this story to be completely wrong. “The White House is pushing back hard against a New York Times report that the president’s political team is considering a national ad campaign that would cast the GOP as taken over by tea party extremists,” the article opens, continuing “The story is “100 percent inaccurate,” a White House official told POLITICO.”