Report: Trump Spoke Under Condition of Anonymity in Meeting with Anchors 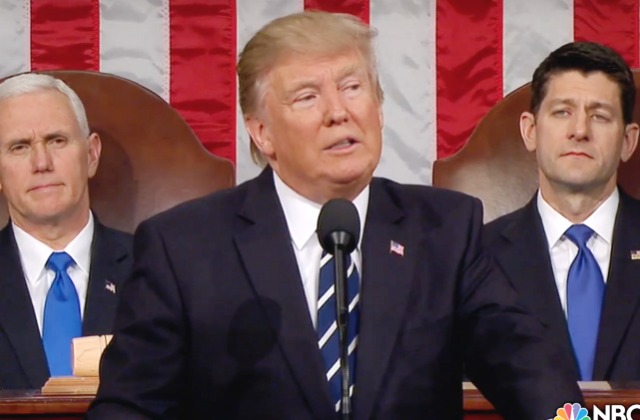 On Tuesday night, stories citing an “official” as a source, like this one from CNN, started to appear about President Donald Trump’s intentions going into his address to Congress. At 5:59 p.m. ET, BuzzFeed News put up a story attributing the comments to Trump himself, with CNN adding new quotes from the president to its existing story moments later. Another hour or so later, BuzzFeed ran with the story that you can see emerging out of this: That Trump, who has demanded the media not be “allowed” to use anonymous sources, offered himself up to the media as an anonymous source by providing comments on background. Some of his comments were allowed under the agreement of Trump’s meeting with reporters to be attributed, but only once the clock ticked to 6:00 p.m.

While government officials — including the President of the United States — going on background in this kind of meeting with reporters is not unusual, that it came days after Trump’s comments about anonymous sources at the Conservative Political Action Conference makes it newsworthy. One of the reporters in attendance, speaking on background to BuzzFeed, said that the access to Trump and other officials was superior to what the Obama administration offered before his addresses. “They have been completely off record before,” said the source. “The one on background and then some on record is new under Trump,”